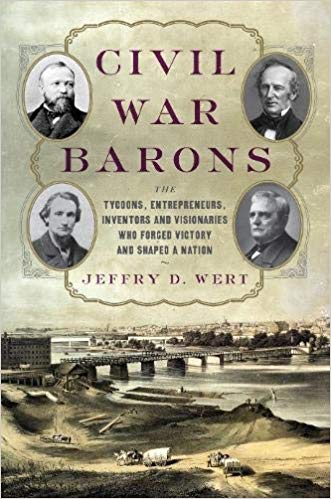 Da Capo Press has recently published Jeffrey D. Wert’s fascinating new book on Civil War Barons: The Tycoons, Entrepreneurs, Inventors, and Visionaries Who Forged Victory and Shaped a Nation. Jeff, a long-time acquaintance and fellow author, is a retired school teacher from Center Hall, PA. Wert’s widely acclaimed books have rightfully earned him a national reputation as one of the finest Civil War writers of our generation. In this work, he provides snapshots of dozens of leading businessmen in the North whose genius, persistence, and vision of “find a need and fill it” led rise to the industrial and financial might that greatly augmented the Union’s war effort.

He discusses many successful men whose names are familiar to modern Americans through the companies they founded before or during the war — Armour meats, Weyerhaueser lumber, John Deere farm equipment, Squibb pharmaceuticals, and many others. He also describes the contributions of Jay Cooke, Cornelius Vanderbilt, Robert Parrott (the developer of the famed Parrott Rifles that were a key part of the lineup of Civil War artillery), James Eads of  “brown water navy” riverine ironclad fame, Cyrus McCormick (whose reapers were often found on farms North and South), and many others, including Pennsylvania railroad executives J. Edgar Thomson and Thomas A. Scott. The latter two were familiar names here in south-central Pennsylvania through their influence over the Northern Central Railway that ran through York County.

One of the most interesting people that Jeff introduces is Gail Borden, Jr. In 1856, the New York native patented a process to condense, preserve, and can milk while maintaining its “sweetness” and purity. After his initial company failed, he and a new financial backer formed the New York Condensed Milk Company in 1857 at Wassaic, NY. Shortly after the Civil War erupted, Borden received a War Department order for 500 pounds of condensed milk for the soldiers. As the war expanded and the Union army and navy greatly increased in size, demand skyrocketed. By the beginning of 1863, the expanded Wassaic factory yielded 50,000 quarts over a three-day period at peak production. Borden needed far greater output for incoming orders.

It was time to license the patent to other producers.

Enter the Baltimore Condensed Milk Company and its new factory on the north side of York, Pennsylvania.

In 1863, Borden erected a new factory in Brewster, NY. He also licensed two other producers to use his patented process and the Borden trademark. They were the Rokomeka Company in Livermore Falls, Maine, and Numsen, Carroll & Co. of Baltimore. The latter was a major customer, distributing Borden’s Condensed Milk and the associated Eagle brand in the mid-Atlantic region. William Numsen, his two sons, and their partner Stephen J. Carroll were significant canners  and distributors of oysters and fruits in the Baltimore area.

In early 1863, Numsen, a prosperous German immigrant, sought a location with a significant dairy industry and easy access to rail lines and major transportation routes for a new factory. He selected York, with its location along the Northern Central Railway, the north-south Baltimore-Harrisburg Turnpike, and the east-west Pittsburgh-Philadelphia Turnpike. With Borden’s financial backing, Numsen established the Baltimore Condensed Milk Company. On April 13, 1864, Governor Andrew G. Curtin signed Act 335 of the PA state legislature  to incorporate the company. By then, Numsen had already erected a facility to condensed milk along Willis Run on the northern outskirts of York near a grist mill and other small industries. The new factory emitted large clouds of smoke and steam from the manufacturing process but soon was a financial success with the lucrative military contracts. The NCRY began shipping large quantities of Borden branded condensed milk to quartermaster supply depots in the mid-Atlantic and northern Virginia.

The Baltimore Daily Commercial noted in an ad on March 5, 1866, “The Condensed Milk is not only chemically pure, but in an another and equally sense it is absolutely pure in being absolutely clean. No one can visit the factory without being struck with the extreme care taken and the efficiency of the means employed to insure the most perfect cleanliness. Every utensil, from the smallest cup to the vacuum pan, shone like a mirror, while boiling water and high steam was lavishly used to remove from the premises every thing that might act as the slightest source of contamination. From the moment the Milk is received at the door of the factory until it is passed out again to the consumer, it is never touched by the human hand. It is not only clean, but it is also undiluted, and in this respect differs widely from our City Milk supply.”

Fellow YDR blogger June Lloyd wrote of a post-war fire that erupted on the second floor of the Baltimore Condensed Milk Company in late December 1867. In 1868, Stephen Carroll left the parent company, which was renamed William Numsen & Company. The York factory began canning fruits as an auxiliary to the Baltimore facility, while still producing condensed milk for some period of time. By 1876, ownership had changed to the Thomas Chambers Fruit Canning Factory. In February 1896, the owners notified the farmers that supplied its milk that the factory was closing. At the time of its subsequent receivership, the company listed assets of $20,000 versus liabilities of $102,000.

The Borden brand name continues today as a trademark of a Mexican-based food conglomerate.

Today, thousands of drivers pass the former site of the factory along N. George Street. Few realize that for the latter half of the Civil War, this was one of the most significant producers of Borden’s Condensed Milk in the entire country. Many York County soldiers in the field opened cans of York-produced milk and used it to soften their dense hardtack, salt pork, and other foods.

To read more about Northern industrialists and their impact on the Civil War, please pick up a copy of Jeffrey D. Wert’s new book.