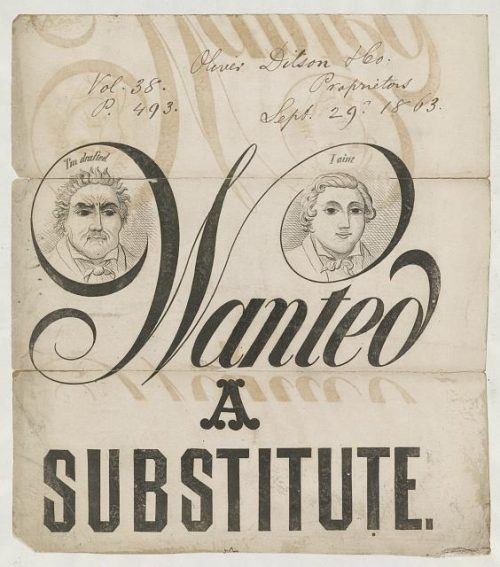 An illustrated sheet music cover, which protests the inequities of the draft or proscription system enacted under the Enrollment Act of 1863. Library of Congress.
Posted by Scott MingusNovember 2, 2018October 3, 2020 Civilians, Railroads, Yankees, York

The Union army and navy needed men. Lots of men.

With the war escalating, casualties mounting, and volunteer enlistments not adequate to provide fresh manpower, Congress took action to bolster the armed forces in anticipation of a bloody season of fighting the Confederates. On March 3, 1863, it passed the Enrollment Act. Every male citizen between the ages of 20 and 45 was eligible to be drafted into the military. The act also applied to any immigrant who had filed for citizenship but did not apply to aliens who had not yet applied. Each congressional district had a strict quota of men that must be provided. The law proved highly unpopular, inciting draft riots and protests in several places, most notably New York City.

A drafted man could avoid serving in the military if provided a substitute to take his place as a soldier and paid a bounty of $300. Several wealthier draftees, including men here in York County, PA, took advantage of this exception and hired substitutes. If a draftee did not have the cash to obtain a suitable substitute, he was out of luck. He had to report for duty.

Some men filed for limited exemptions based upon religious objections. Others chose to hide or run away. Sometimes, it was the substitute who fled.

For more than one York Countain, that choice of fleeing led to arrest and incarceration, plus being forced into the army anyway.

Here’s just one example, taken from the Baltimore Sun, August 22, 1864. A deserter rode the Northern Central Railway train from York down to Baltimore, where his luck ran out.

“Samuel Shields, who hails from York, Pa., was arrested yesterday and placed in confinement on a charge of attempting to evade the draft in York by coming to this city. Deserters, both of newly arrived substitutes and older soldiers, are arrested almost every day at the depot by detectives and guards. They are generally dressed in citizen’s clothes, but yet there seems to be something about them by which they are detected. A Massachusetts substitute was caught yesterday, just getting off, with $110 in his pocket.”

The same paper mentioned a similar incident with another draft dodger.

“James Cussick, who was a few days ago accepted as a substitute for Walter Cadman, a clerk in the Paymaster General’s Office, has been ascertained to be a deserter from the 2nd District volunteers. Cussick had sent $100 by express to New York, and that money is now on its way back and will be returned to Mr. Cadman.”

Blogger’s note: Back in October 1861, Walter Cadman’s name had showed up on a list of government employees who were suspected of disloyalty to the government and “in sympathy to the rebels.” An investigating committee later verified the charges against Cadman but he maintained his innocence and kept his job. Samuel Shields does not appear in Dennis W. Brandt’s records of York County soldiers, so his fate is unknown. Many draft dodgers served their sentences and then were sent home.