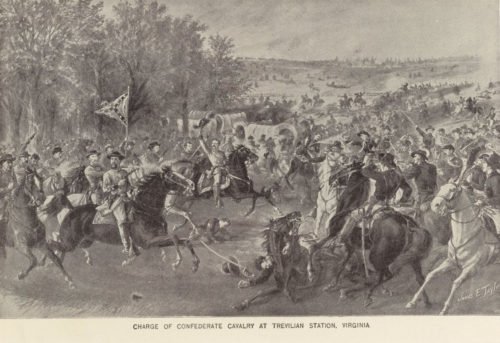 On May 16, 2018, please join the York Civil War Round Table in its 21st Year in welcoming American Civil War cavalry historian and author, Eric J. Wittenberg, to our meeting for his presentation “The Battle of Trevilian Station.” The monthly meeting is at 7 p.m. at the Historical Society Museum, Library and Archives, 250 E. Market Street, York, Pennsylvania. Admission and parking are both free, and the meeting is open to the public.

U.S. Grant was the master of the strategic cavalry raid. He honed that skill during the Vicksburg Campaign and used it to great effect throughout the Civil War. On June 7, 1864, Maj. Gen. Philip H. Sheridan led two divisions of the Army of the Potomac’s Cavalry Corps on a raid along the north bank of the North Anna River intended to do two things: cause extensive damage to the Virginia Central Railroad so as to put it out of commission, and to link up with Maj. Gen. David Hunter’s army near Charlottesville, and then to escort it back to join the Army of the Potomac near Petersburg. While the Confederates were distracted by Sheridan’s raid, the Army of the Potomac would steal a march across the James River and would invest Petersburg. If Petersburg fell, Richmond would too, so the stakes were high. Maj. Gen. Wade Hampton, leading two divisions of Confederate cavalry, defeated Sheridan and prevented him from accomplishing any of his objectives in the largest all-cavalry battle of the Civil War. Come hear award-winning historian Eric J. Wittenberg describe the Civil War’s only decisive cavalry battle.

Eric J. Wittenberg is an accomplished American Civil War cavalry historian and author. An attorney in Ohio, Eric has authored, co-authored, or edited more than a dozen books on Civil War cavalry subjects, including “The Battle of Monroe’s Crossroads and the Civil War’s Final Campaign” (Savas Beatie, 2006), “Plenty of Blame to Go Around: JEB Stuart’s Controversial Ride to Gettysburg” (Savas Beatie, 2006), and “One Continuous Fight: The Retreat from Gettysburg and the Pursuit of Lee’s Army of Northern Virginia, July 4-14, 1863 (Savas Beatie, 2008). Eric has also penned dozens of articles in popular magazines such as “North & South”, “Blue & Gray”, “America’s Civil War” and “Gettysburg Magazine.”

A favorite speaker at Civil War Roundtables, Eric enjoys conducting tours of cavalry battlefields and related sites. He was instrumental in saving important battlefield land at Trevilian Station, Virginia, and wrote the text for the historical wayside markers located there. Eric lives in Columbus, Ohio, with his wife Susan and their beloved dogs.