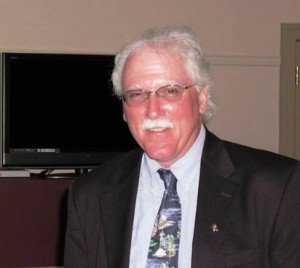 The York Civil War Round Table will feature the always entertaining Dr. Charles C. Fennell, Jr. at its monthly meeting on Wednesday, October 17, 2012. Dr. Fennell is returning for his annual Battlefield Talk and Walk Program which has been held for the past ten years. The topic this year is “In the Eye of the Storm: The Philadelphia Brigade at Gettysburg.”
Originally formed as the California Brigade, the men of the Philadelphia Brigade held the Angle, the focal point of Pickett’s Charge on July 1,1863. Although most students of the Battle of Gettysburg know the brigade’s contribution to Union victory on July 3, few realize that men of the brigade participated in the fighting on Cemetery Hill and Culp’s Hill on July 2 as well. Fewer still know the significance of the Philadelphia Brigade’s contribution to the creation of the memorial landscape at Gettysburg National Military Park. We will follow this most important and in many ways most controversial brigade’s history during the Battle of Gettysburg.
The meeting will be held at 7:00 p.m. on Wednesday evening in the auditorium of the York County Heritage Trust at 250 E. Market Street in downtown York, Pennsylvania. The presentation is FREE and open to the public! Parking is also free!
The Battlefield Walk / Field Study with Dr. Fennell will be held on Saturday, October 20, 2012 at 10:00 a.m. at Gettysburg National Military Park. The cost is $10.00 payable at the walk. If interested, meet on East Cemetery Hill. The walk will be approximately 2 hours long and will end at the Angle. The walk will cover the moments of the Philadelphia Brigade on July 2 and July 3.
Dr. Charles C. Fennell, Jr. of Harrisburg Area Community College is an adjunct faculty member at the Gettysburg Campus, as well as a Licensed Battlefield Guide at Gettysburg National Military Park. Dr. Fennell is one of the recognized experts on the Culp’s Hill portion of the Gettysburg Battlefield. He received his Ph.D. from West Virginia University.
In addition to Dr. Fennell’s Program, the York Civil War Round Table will be celebrating the 5Th Anniversary of their partnership with York County Heritage Trust and their 15Th Anniversary as a Civil War Round Table. Please join us in our celebration!
Bring a friend to hear one of the most entertaining public speakers and educators in our area for what promises to be an informative and enjoyable evening!
See you there!!