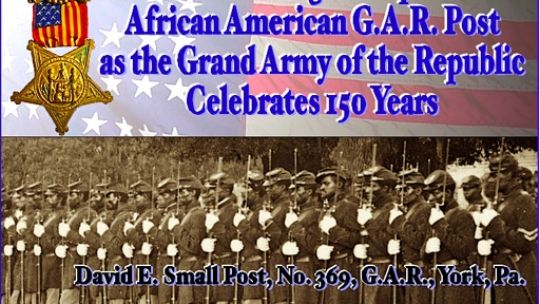 The Grand Army of the Republic became the most successful of the various veteran organizations, which formed following the civil war. During 2016, the G.A.R. celebrates 150 years since it was founded on April 6, 1866. The G.A.R. became a powerful political force. They were responsible for officially getting May 30th established as Memorial Day and in lobbying Congress to establish regular veterans’ pensions. Learn more about this nationwide veterans organization through examination of a unique African American G.A.R. Post; the David E. Small Post, No. 369, from York, Pennsylvania.

The meeting will be held in the auditorium at York County Heritage Trust located at 250 E. Market St. in downtown York, Pennsylvania. There is no charge for admission and the public is welcome. For more information, readers may call YCHT at 717-848-1587 or www. yorkheritage.org.

Stephen H. Smith is the author of the article “After Civil War, Veterans Organize in York County, Black Veterans and the David E. Small Post, No. 369, G.A.R.” Published by the York County Heritage Trust in the 2015 Journal of York County Heritage; pages 14-33. Mr. Smith earned his bachelor’s and master’s degrees in Mechanical Engineering from Penn State University and retired as a Manager of Design Engineering at York International Corporation. He wrote an award-winning family history Barshingers in America, and during his retirement, continues to write and give talks about local history.

Mr. Smith is a lifelong Yorker who caught the local history bug early in life. He writes a blog for the York Daily Record where he shares a hodgepodge of explorations of York’s Past in his blog apply titled Yorks Past.