The York Civil War Round Table begins its 20th Anniversary year and 2017 campaign with featured speaker Chris Brenneman at its monthly meeting on Wednesday, January 18, 2017, at 7 p.m. Chris will present a PowerPoint presentation titled “Secrets of the Cyclorama” based on the book he co-authored with Sue Boardman, “The Gettysburg Cyclorama — The Turning Point of the Civil War on Canvas.”

The meeting will be held at the Historical Society Museum of the York County History Center located at 250 E. Market St., York, Pennsylvania. There is no charge for admission and the public is welcome.

In the “Secrets of the Cyclorama” discussion, Chris explores some of the more unusual facets of Paul Philippoteaux’s  giant painting that he came across during the writing of his book “The Gettysburg Cyclorama- The Turning Point of the Civil War on Canvas.”

The program consists of a 40-minute PowerPoint presentation which includes extreme close-up views of the painting. During this part of the program, we will look at some of the distant figures that are barely visible to the naked eye. He will also talk about the fact that the painting was modified in 1889. Comparison photographs from 1884 and today will illustrate some of the items that were added or changed. During his research, Chris found that the promoters used suggestions from the Boston audience in the early 1880s to make some of these modifications. We will also look at some of the Civil War veterans who visited the painting and were later added to the keys which helped visitors in the 1800s interpret the painting. After the first part of the program, Chris will open up the floor to questions on the cyclorama and the Battle of Gettysburg. He will also be available to sign books at the end of the evening. 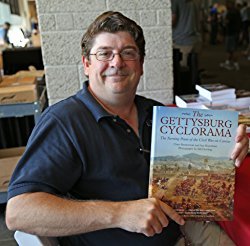 Chris Brenneman was born in York, Pennsylvania, and is a lifelong student of history, especially the Civil War. He has been visiting Gettysburg since he was very young in the 1970s. Chris graduated in 1992 from the University of Delaware with a bachelor’s degree in psychology. Chris has been a Licensed Battlefield Guide at the Gettysburg National Military Park since 2009. He is also an employee of the Gettysburg Foundation, the non-profit group that oversees the Visitor’s Center and Museum at the park.

As part of his job, Chris spends several hours each day observing the cyclorama. As a result of thousands of hours of study, he is familiar with all of the intricate details of the painting. In his new book, Chris focuses on all of the people and places depicted in the Gettysburg Cyclorama.