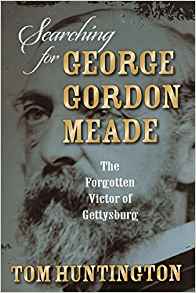 PRESS RELEASE – YORK PA: On July 19, 2017, please join the York Civil War Round Table in its 20th Anniversary Year, welcoming author Tom Huntington to our meeting for his PowerPoint presentation titled “My Search for Meade,” based on his book “Searching for George Gordon Meade: The Forgotten Victor of Gettysburg.” The monthly meeting is at 7 p.m. at the Historical Society Museum, Library and Archives, 250 E. Market Street in York, PA. Admission and parking are both free, and the meeting is open to the public.

Tom Huntington called his book “Searching for George Gordon Meade: The Forgotten Victor of Gettysburg” because it seems the history books have largely overlooked the man who led the Army of the Potomac for the final two years of its existence.

Born 1815 in Spain (where his father, from Philadelphia, served as a merchant and a commercial agent for the U.S. Navy), Meade graduated from West Point, fought in the Mexican-American War and built lighthouses. He received command of the dysfunctional Army of the Potomac only three days before winning the pivotal battle of Gettysburg, and he remained the army’s leader until it was dissolved on June 28, 1865. Meade died in 1872, helped to his grave by wounds he received ten years earlier.

Huntington wanted the book to reflect his own journey of discovery as he investigated Meade’s disappearing reputation. He told the story of Meade’s life, but also wrote about his own visits to Civil War battlefields to see what was there now. He visited museums and talked to park rangers, curators, preservationists and people who have found their passion in Civil War history. Along the way, he visited a horse’s head, an amputated arm, and a severed leg.

The resulting book is a compelling mash-up of history, biography, travel and journalism that touches both past and present. 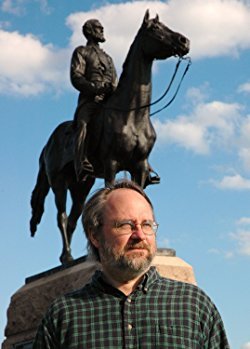 Tom Huntington is the author of “Searching for George Gordon Meade: The Forgotten Victor of Gettysburg” as well as “Guide to Gettysburg Battlefield Monuments,” “Pennsylvania Civil War Trails,” and “Ben Franklin’s Philadelphia.” He is also the former editor of “American History” and “Historic Traveler” magazines, and his writing has appeared in many publications, including “Smithsonian,” “Air &Space,” “American Heritage,” “Invention and Technology,” “British Heritage,” and “Yankee.” Although a Maine native, he now lives in Camp Hill, Pennsylvania, with his wife Beth Ann, and two children. He is currently working on a book about the Maine soldiers who fought at Gettysburg.