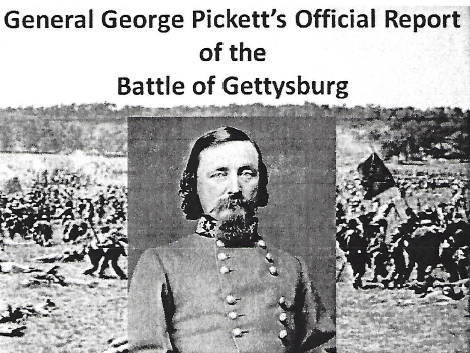 PRESS RELEASE: The York Civil War Round Table will feature York native and roundtable member, Randy Drais, as its featured speaker at the monthly meeting on January 21, 2015. Mr. Drais will present a PowerPoint talk on “General George Pickett’s Official Report of the Battle of Gettysburg.”

The meeting will be held at 7 p.m. on Wednesday evening in the auditorium of the Historical Society Museum at 250 E. Market St. in downtown York, Pennsylvania. There is no charge for admission and the public is welcome.

As most Battle of Gettysburg buffs know, General George Pickett did write an Official Report after the battle on the operations of his division. After reading it, General Robert E. Lee responded in early August and ordered Pickett to destroy both the original and the copy and to resubmit a new report to him. General Lee felt that the content of the report would cause divisiveness within the army. Considering the controversy surrounding the events of July 3, 1863, the importance of Pickett’s Official Report is obvious, but there is no concrete evidence that Pickett even filed a new report.

Rumors persist to this day that the copy (or another copy) of the original Official Report is still out there somewhere (Pickett’s wife LaSalle claimed to have had the/a copy). The “million dollar” question still remains: what was in that Official Report that would cause such divisiveness that General Lee would consider it harmful to the morale of the Army of Northern Virginia?

Randy Drais was born and raised in York, Pennsylvania. A graduate of York College of Pennsylvania with a B.A. in International Studies, Randy has worked in the Pennsylvania House of Representatives, the Pennsylvania Department of State, and the Pennsylvania Senate. Married with two daughters, Randy recently retired on January 1, 2015. Now he will be able to devote even more time to his main passion, learning even more about the Battle of Gettysburg and sharing that information with others.