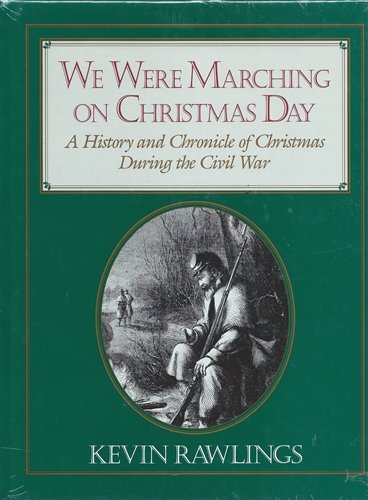 On November 15, 2017, please join the York Civil War Round Table in its 20th Anniversary Year, welcoming Civil War living historian Kevin Rawlings portraying the Thomas Nast Patriotic Civil War Santa Claus. The monthly meeting is at 7 p.m. at the Historical Society Museum, Library and Archives, 250 E. Market Street in downtown York, PA, 17403. Admission and parking are both free, and the meeting is open to the public.

Kevin Rawlings portrays the Patriotic Civil War Santa each Christmas season, based on the illustration by Thomas Nast that appeared on the front page of Harper’s Weekly on January 3, 1863. Rawlings’ presentation enchants the young and the young at heart. Using numerous illustrations, he explains some of the lore and evolution of Santa, beginning with his birth 1,739 years ago in ancient Lycia. He continues with Santa’s evolution from early Christian Turkish clergyman Saint Nicholas with lean, angular features in his bishop’s robe and miter to the jolly, red-cheeked, grandfatherly Santa we know today. This version in the familiar red suit with white fur trim was painted by Haddon Sundblom for Coca Cola. Starting in 1931, Sundblom painted annual canvases for Coca Cola advertisements which appeared in prominent publications such as National Geographic, Look, Life, Saturday Evening Post, and is the basis for the shopping mall Santas of today.

Rawlings has been portraying Civil War Santa for over twenty nine years at historic sites, Civil War Roundtables and Historical Societies. He is a Civil War living historian, actor, professional researcher, including a film researcher on several program series on the History Channel which include “World War II in HD” and the Vietnam War in HD.” He is the author of “We Were Marching on Christmas Day: A History and Chronicle of Christmas During the Civil War,” published by Toomey Press in 1995. A second edition of the first printing has recently been published and is available for purchase. Kevin Rawlings resides in Frederick, Maryland. 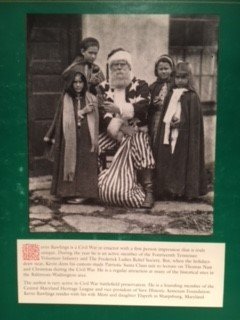 3rd Annual An Evening to Unravel York History, Weird York County; sponsored by the York Daily Record. December 6, 2017. 7 to 9:30 PM. DreamWrights Center for the Performing Arts, Route 74/Carlisle Street, York PA. Tickets are on sale now, and they are only $10. Book signing precedes and follows the event. All proceeds from the sale of Scott Mingus’s Underground Railroad book go back to the York County History Center for preservation. Other books will be available from the various speakers.

Remembrance Weekend at Gettysburg — Scott Mingus will be signing several of his Civil War books at the Visitors Center Museum Bookstore on Sunday, November 19, 2017, from 1 pm until 5 pm.

Special talk on the burning of the Columbia-Wrightsville Bridge — Thursday, December 6, 6:30 PM at the Columbia Crossings River Trails Center in Columbia PA.  For tickets and more information, click here. Books will be available.