Press Release from Kathy Friel of the York (PA) Civil War Round Table:

On January 17, 2018, please join the York Civil War Round Table as it kicks off its 21st campaign year, welcoming local author Gene Barr as the featured guest speaker. Mr. Barr will present a PowerPoint talk based on his book “A Civil War Captain and His Lady: Love, Courtship, and Combat from Fort Donelson through the Vicksburg Campaign.”

The monthly meeting is at 7 p.m. at the Historical Society Museum, Library and Archives, 250 E. Market Street in downtown, York, PA. Admission and parking are both free, and the meeting is open to the public. 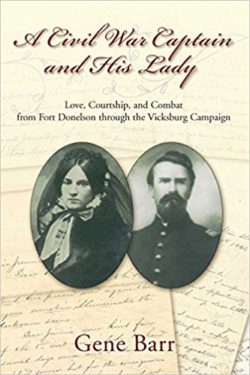 “A Civil War Captain and His Lady” is a true “Cold Mountain” love story from the Northern perspective of Josiah Moore and Jennie Lindsay, two immigrants from Ireland. Josiah was the Captain of the 17th Illinois Infantry and his war would be a long and bloody one. Their courtship and romance, which came to light in a rare and unpublished series of letters, forms the basis of Gene Barr’s memorable story.

In addition to this deeply moving and often riveting correspondence, Barr includes additional previously unpublished material on the 17th Illinois and the war’s Western Theater, including Fort Donelson, Shiloh, Vicksburg, and the lesser known Meridian Campaign –  actions that have historically received much less attention than similar battles in the Eastern Theater. The result is a rich, complete, and satisfying story of love, danger, politics, and warfare, and it is one you won’t soon forget.

Gene Barr is the president and CEO of the Pennsylvania Chamber of Business and Industry, the largest broad-based advocacy group in Pennsylvania. He has spent more than forty years in the political and government affairs world, including more than twelve years with a Fortune 100 energy company. He is a board member of the National Civil War Museum in Harrisburg and spent many years engaged in Civil War living history events. He is a native of Philadelphia and lives in Mechanicsburg, Pennsylvania, with his wife Mary.

Gene Barr will have copies of his popular book for sale and signature before and after his presentation. I was privileged to have read through the manuscript during its final stages, and must say that this is an engrossing true story, not only of the personal interactions between a soldier and the girl he loved, but also with her family. It is also full of fascinating military history, with many fresh accounts of the campaigns in the Western Theater.

If you cannot make it in person to see and hear Gene’s interesting presentation, autographed copies are available direct from the publisher, Savas Beatie, or from local retailers such as Civil War and More in Mechanicsburg, PA. I urge Cannonball readers to support independent book publishers and hometown book stores.