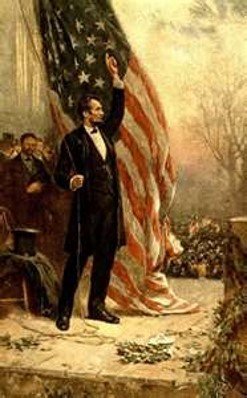 York CWRT to discuss “Lincoln and the Founders” at Nov. 14 meeting

On November 14, 2018, please join the York Civil War Round Table as it commemorates the 155th anniversary of Lincoln’s Gettysburg Address in welcoming Lincoln scholar Scott E. Rosenau as the scheduled speaker. Mr. Rosenau will be presenting a PowerPoint program titled “Lincoln and the Founders: Completing the Unfinished Work.” The monthly meeting is at 7 p.m. at the Historical Society Museum, Library and Archives, 250 E. Market Street, York, Pennsylvania. Admission and parking are both free, and the meeting is open to the public. Bring a friend. Please note that the CWRT normally meets the third Wednesday of the month; this meeting is an exception because of Thanksgiving eve.

In the Gettysburg Address, Abraham Lincoln said that the nation should be dedicated “to the unfinished work which they who fought here have thus far so nobly advanced.”  What is this unfinished work that Lincoln referred to?  When Lincoln started his famous address with “Four score and seven years ago,” he hearkened back to the year 1776.  He referred to the Declaration of Independence that was passed on July 4th of that year and stated that “all men are created equal.”

Much of Lincoln’s political ideology stems from the Declaration of Independence.  His words and policies before and during the Civil War demonstrate his reverence for the Declaration.  While Lincoln was not an abolitionist calling for the immediate end of slavery, he did believe that it should be put in “the course of ultimate extinction.”  To do this, he believed that the United States should restrict the spread of slavery to the new territories.

As President, Lincoln originally pushed for saving the Union that the Founders created.  As the Civil War progressed, Lincoln came to realize that he could no longer push for the restoration of the Union as it was.  He had to restore the Union so that it was worth the saving and to prevent further division over this issue in the future.

Mr. Rosenau will discuss how Lincoln’s ideas and policies constantly evolved throughout his political career up to the passage of the 13th Amendment which Lincoln declared “a King’s cure” for the issue of slavery in America.

REMINDER: The York CWRT does not meet in December. Please enjoy the holiday season with your family and friends, and we will see you on January 16 as we kick off our 2019 schedule of interesting speakers!