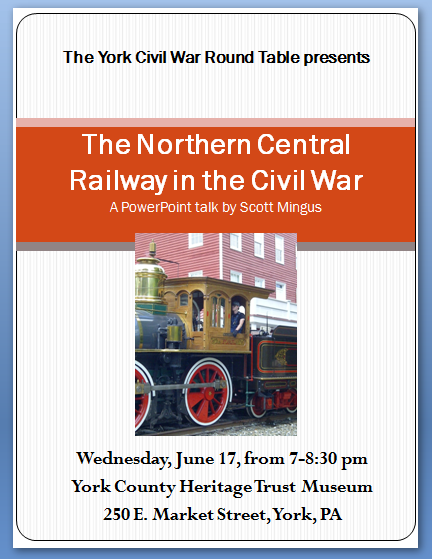 The railroads of both the North and the South played important roles in the Civil War, perhaps more so than in any previous war. Troops, ammunition, supplies, horses and mules, coal for naval ships, and cargo of all sorts for the military effort were shipped via train. Wounded men were taken to hospitals. Fresh troops headed for the front. Nurses and doctors headed to battlefields. Civilians started their mournful journies to reclaim the bodies of fallen loved ones. Men whose terms of enlistment had expired headed home.

The principal railroads in York County, Pennsylvania, during the Civil War were the Hanover Branch Railroad (which ran roughly east-west from Hanover in the southwestern corner to Hanover Junction) and the Northern Central Railway which entered the county from the Maryland line south of Shrewsbury and ran north through Hanover Junction, where it intersected the HBRR. From Hanover Junction, the NCR continued northward through York, Emigsville, and York Haven up into Cumberland County. A spur ran eastward from York to Wrightsville on the Susquehanna River, where it connected at the Columbia Bridge to the Pennsylvania Railroad.

The York Civil War Round Table is hosting a public event on Wednesday night, June 17, 2015, at 7 p.m. at the York County Heritage Trust. Cannonball blogger and published author Scott Mingus will present a PowerPoint talk on “The Northern Central Railway in the Civil War.” Bill Lewis will have on display his layout of the tracks at Hanover Junction. The public is welcome; no reservations are required. The meeting is free, as is on-street parking. 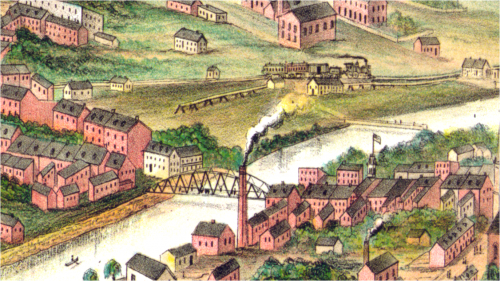 A Northern Central train steams out of York in this antebellum chromolith image by the Baltimore firm of A. Hoen.

The speaker will briefly discuss the early history of the Northern Central, which can be traced to the Baltimore & Susquehanna Railroad and its merger with other local lines. He will discuss the early defense of the railroad infrastructure at the beginning of the Civil War when Confederate raiders targeted the tracks, switches, and bridges. The NCR employed an armored artillery platform, as well as utilizing thousands of Union soldiers, in Maryland during the first year of the war to protect its interests. Much of the talk will focus on the Confederate attacks on the NCR during the Gettysburg Campaign, as well as President Lincoln’s trips through York County on the NCR.

Scott Mingus is a scientist and executive in the global paper industry, and holds patents in self-adhesive postage stamps and bar code labels. The Ohio native graduated from the paper science and engineering program at Miami University. He was part of the research team that developed the first commercially successful self-adhesive U.S. postage stamps.

The York, Pa., resident has written twelve Civil War books. His biography of Confederate General William “Extra Billy” Smith won the 2013 Nathan Bedford Forrest Southern History Award as well as the Dr. James I Robertson, Jr. Literary Prize, and was nominated for the Virginia Literary Award for Non-Fiction. He also wrote several articles for Gettysburg Magazine. Scott maintains a blog on the Civil War history of York County (www.yorkblog.com/cannonball). He received the 2013 Heritage Profile Award from the York County Heritage Trust for his many contributions to local Civil War history.

He also has written six scenario books on miniature wargaming and was elected to the hobby’s prestigious Legion of Honor. His great-great-grandfather was a 15-year-old drummer boy for the 51st Ohio Infantry, and other family members fought in the Army of the Potomac at Antietam and Gettysburg.