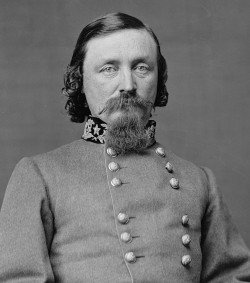 The York Civil War Round Table invites the public to its monthly meeting on Wednesday, August 20 at 7:00 PM in the auditorium of the York County Heritage Trust, 250 E. Market Street, York, PA. The meeting and parking are free of charge.

This month’s speaker is Hanover resident and York Civil War Round Table member Brian Blake who will present a PowerPoint talk based on his research on Confederate Maj. Gen. George E. Pickett called “George Pickett: Southern Patriot or War Criminal.”

Confederate General George Pickett is one of the most well-known and recognizable names from the Civil War. When one thinks of George Pickett they think of the quintessential Southern General – chivalrous, brave and honorable. Pickett is also seen as a tragic figure, representing the Lost Cause of the Confederacy, for having his division decimated in 30 minutes at a place called Gettysburg. However, just seven months after Gettysburg, Pickett ordered the execution of 22 captured Union prisoners in coastal North Carolina.

How could a man who represents the ideal Southern gentleman commit such a heinous crime? After the war, Pickett would flee to Canada and be dogged by the Judge Advocate General’s Office for the executions but ultimately be pardoned by President Andrew Johnson. With passage of time, faded memories and a national wave of reconciliation, he would become the Pickett we have come to know today. We will look for the real George Pickett and try to separate the man from the myth.

Brian Blake and his wife Lisa have been volunteers at the Gettysburg National Military Park for 15 years and are members of the York Civil War Round Table. Brian and Lisa reside in Hanover, Pennsylvania.