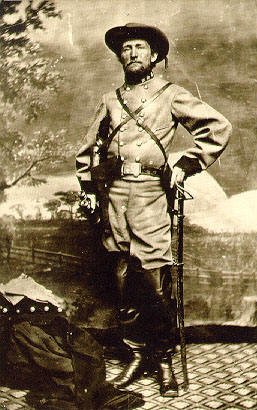 The York Civil War Round Table will feature author Eric W. Buckland at its monthly meeting on Wednesday, July 15, 2015. Mr. Buckland will present a PowerPoint talk based on his five books on the 43rd Battalion Virginia Cavalry – “Mosby’s Rangers”. The program will present the details of the wartime and post-war lives of some of those men.

The meeting will be at 7 p.m. in the auditorium of the York County Heritage Trust at 250 E. Market Street, York, Pennsylvania, 17403. The public is welcome; no reservations are required. The meeting is free, as is on-street parking.

John Singleton Mosby remains the “face” of the 43rd Battalion Virginia Cavalry- better known as “Mosby’s Rangers”. He is often the quintessential example of a brilliant and daring partisan leader. Indeed, his induction into the U.S. Army Ranger Hall of Fame in 1992 reflects his continued high standing within the pantheon of successful unconventional warriors.

There can be little doubt, however, that Mosby was exceptionally fortunate in the quality of men who comprised his command. Those men- some as young as 14 years old- were the ones who successfully carried out his operations. Their intelligence, courage, audacity (and even swagger) enabled Mosby to launch multiple simultaneous de-centralized patrols in his effort to disrupt Union lines of communication. Favored with subordinate leaders and Rangers who could be trusted to execute his tactical vision without direct supervision, Mosby himself became ubiquitous in the minds of the Union soldiers arrayed against him. Indeed, without the men who followed him, the “Mosby” we know today would never have existed.

Eric W. Buckland has written five books about some of the men who rode with the 43rd Battalion Virginia Cavalry- “Mosby’s Rangers”. The books are: “Mosby’s Keydet Rangers”, which tells the stories of the 58 men who both matriculated at the Virginia Military Institute (VMI) and rode with Mosby’s Rangers, and the four-book “Mosby Men” series about other noteworthy men who were the 43rd Battalion. Collectively, the five books tell the compelling stories of over 160 Mosby Rangers.

Buckland brings a unique perspective to his work. Receiving a B.A. in English from the University of Kansas in 1977, he was commissioned as a Second Lieutenant in the United States Army (Infantry). Eric spent the majority of his 22-year military career in Special Forces where he was engaged in several facets of Unconventional Warfare and had multiple deployments to Panama, Honduras and El Salvador. He retired fro the Army in 1999 as a Lieutenant Colonel.

Some of his awards include the Ranger and Special Forces Tabs, the Master Parachutist Badge, the Special Operations Combat Diver Badge and the Combat Infantryman’s Badge.

Mr. Buckland is currently employed at the White House Office of National Drug Control Policy as an International Policy Analyst. He and his wife Maureen reside in Centreville, Virginia.