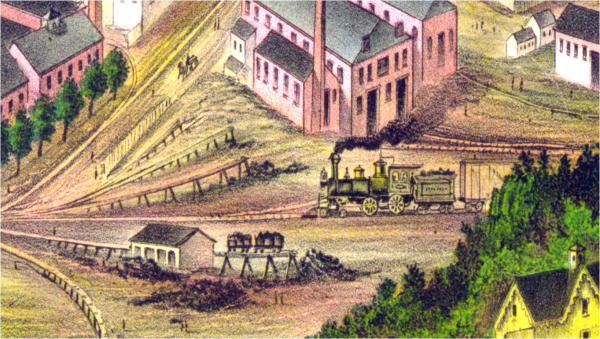 A Northern Central Railway train steams into the yard at York, Pennsylvania, in this 19th-century sketch. The NCRW was an important supply route for the Union army and navy during the American Civil War, carrying thousands of troops, as well as supplies, ammunition, horses, forage, and coal southward.

Here are some more of your questions regarding the Civil War in York County, PA… 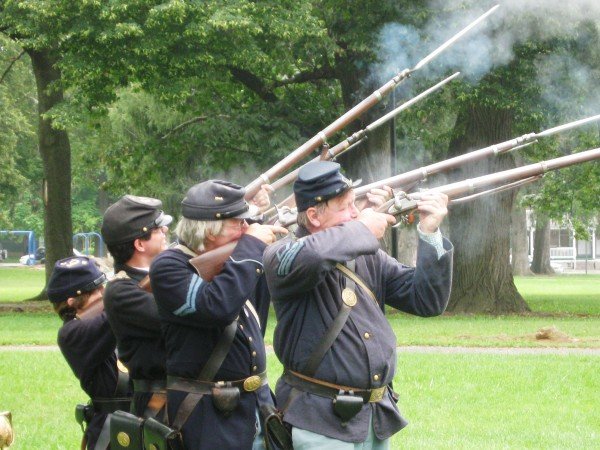 Reenactors of the 87th Pennsylvania present a firing demonstration in Penn Park.

Q – My ancestor served in the 87th Pennsylvania regiment during the war. Did they fight in any major battles?

A – The 87th early in the war served primarily in Maryland and Virginia guarding railroads and important roads. In the summer of 1863, they saw their first serious combat action during the 1863 Gettysburg Campaign at the Second Battle of Winchester where 11 men died and 21 were wounded. Another 293 were captured in what was surely the Union army’s worst embarrassment in the entire campaign (thanks largely to a series of very questionable decisions by the local commander, Robert Milroy). Perhaps the 87th’s finest moment came a year later in a fierce battle in Maryland along Monocacy Creek. There, a statue commemorates their fine performance.

Q – Did Jubal Early make a serious attempt at finding Stuart’s cavalry or was he having a tizzy fit, or was it just circumstances that he did not hear artillery fire five miles away at the battle of Hanover?

A – According to 19th century George Prowell, Confederate Major General Jubal Early and his staff had paused on his westward march from York to Heidlersburg to enjoy lunch at a tavern in Davidsburg (in Dover Township). After paying for the meals, as the Rebels prepared to leave they could hear the distant sound of artillery. Early did not know this came from an engagement between JEB Stuart’s cavalrymen and troopers from the Army of the Potomac. According to the Prowell account (which originated from tavernkeeper William Julius), Early dismissed the noise as being from militia and mounted his horse to resume his march. To the south of Early, one of his march columns under Brigadier General John B. Gordon also heard the gunfire. They paused at the Ramer farm in Paradise Township (off of East Berlin Road) and Gordon deployed his own artillery on a nearby hilltop. Seeing no threat, he eventually marched away. Historians have speculated what might have happened had Early and Stuart’s cavalry connected in southern York County. 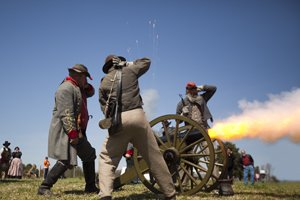 Q – I would love to know more information about my great-great-great-grandfather who served in the 45th Pennsylvania during the Civil War. He was from Wrightsville. How would I locate his pension records?

A – The National Archives and Records Administration holds microfilms of tens of thousands of pension records from Union and Confederate soldiers, including those from York County’s soldiers. Please visit their website and click on the appropriate hot link. They will research their records and see if your ancestor or his family members ever filed a pension claim.  If so, copies are available for a modest fee.