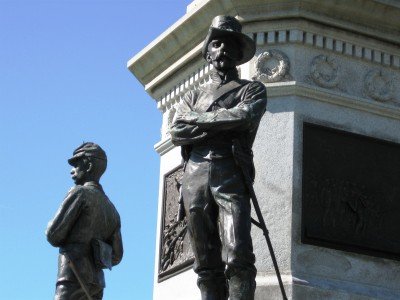 A jauntily clad Union cavalry stands guard over Penn Common in this detail from the York County Civil War Soldiers and Sailors Monument. Thousands of young men from the county joined the army and thousands more men and women supported the war effort by providing food, money, forage, supplies, nursing aid, and other assistance.

Several questions have been received concerning the Civil War in York County. Here are a few of these, with our thoughts.

Q – My great-great-grandfather was drafted into the army, but instead had another man serve in his place. How can that be?

A – The Federal government instituted a draft in 1862 and periodically throughout the rest of the war. A draftee had a few choices: 1) Muster into the army in the designated regiment of drafted militia and serve out the prescribed term of enlistment 2) Enroll in another regiment for a longer term (often to claim the bounty offered to enlistees) 3) Declare himself as a conscientious objector on religious grounds (a relatively new option at the time) 4) Pay a $300 “commutation fee” to the government to avoid the service or 5) On his own find and arrange for a suitable substitute to take his place in the ranks. This latter option proved to be rather popular and even President Lincoln as a show of faith in the system hired his own substitute soldier. A few of the York County substitutes would die in combat. One cannot help but wonder if some of the original draftees who hired these replacements might have later felt a twinge of “survivor’s guilt” when they heard the news?

Q – I have a really nice lithographic print which appears to be a certificate from the state government redeemable for compensation for my ancestor for his losses during the war? Is this good for anything other than a family keepsake?

A – After the Civil War, residents of south-central Pennsylvania could file border claims (also known as damage claims) with the commonwealth to ask for recompense for losses incurred to the invading Confederate army. These could be for horses taken, food eaten, crops damages, fences ripped down and burned for firewood, personal items taken, merchant inventory seized, or other valuables. The claimant had to document exactly what was taken, produce affidavits from witnesses that he owned the property or animals and that they had indeed been taken, or be able to show in some other fashion that the claim was valid. If lucky, the claimant could produce a signed receipt from a Rebel officer. If the claims were against Union troops, they were to be filed with the U. S. government. A commission reviewed each claim, adjusted the amount if necessary (usually downward if they felt the declared value of the lost horses or property was exaggerated), and a made final ruling. If the claims were allowed, the state issued these certificates which were redeemable at such time that the legislature approved the funding. That approval, however, never came. Sectional bickering between the heavily Democratic south-central PA politicians and the Republicans (and other Democrats) from elsewhere in the state helped delay the process. Many of these western, northern, and eastern PA politicians believed that the residents of south-central Pennsylvania were “copperheads” and colluded with the Rebels. Once these issues waned, it looked like the claimants would finally get their money, but a series of budget crises and cuts intervened and no one received a dime. The old certificates are not redeemable, but they indeed make great conversation pieces and are worth a few dollars to Civil War or 19th century litho print collectors. 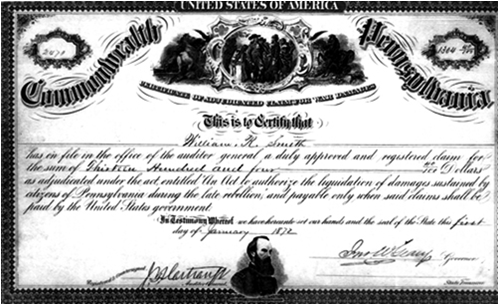 Q – I was researching my ancestor and to my surprise found out that he fought in the Confederate army! Was this common for York Countians to do so? Were they later considered as traitors?

A – The vast majority of York Countians who fought in the Civil War were in Union blue uniforms. However, there were some notable exceptions, including Johnson Kelly Duncan of York borough who became a Confederate brigadier general and played a key role in the defense of New Orleans. Several York County lads headed down to Maryland to sign up in various regiments; a couple of them (the Latimers of Shrewsbury) returned to York during the 1863 Confederate invasion to help guide the oncoming infantry columns. After the war, some of these former Rebel soldiers did return home and resume their lives, mostly in peace. A number of other ex-Confederates later moved to York County and are buried here. Few incidents are recorded of any lingering animosity, but there were exceptions.

Q – I have a Confederate $20 bill which has been passed down through the family for several generations. Supposedly an officer gave it to my great-great-great grandmother in payment for some chickens and other food. Any idea of the value?

A – Value is hard to judge without seeing the bill or a photo of it. Condition and scarcity are two key elements to assigning an insurance value to the currency, or in determining if it is worth selling. Most bills were drawn on the Confederate States of America; some were however issued by private banks throughout the South. In collectible condition, values can range from $100 up to thousands, depending upon rarity, signatures, market demand, etc. Some of the relics shops in Gettysburg do purchase old currency, but be aware that they generally will pay less than half of what they think they can charge. eBay is another option, as is donating the bill to your local historical society so others can enjoy seeing it in years to come.