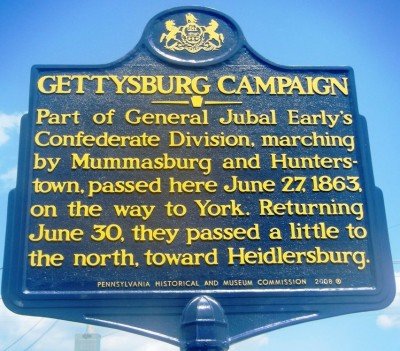 During my book signings and lectures on York County’s Civil War history, I am frequently asked questions about various topics. Most of them are straight forward and I have a ready answer; a few are trickier to answer without researching the answers off-line.

Here is a diverse sampling of some of these questions I have received over the years (including by email), and my thoughts…

Q – I have long heard that the Pickets area near Detter’s Mill named for Confederate General Pickett of the Civil War. He and his men supposedly camped there. Is this true?

A – Interestingly, there are also tales of Major General George E. Pickett camping near New Oxford during the Gettysburg Campaign.  Pickett commanded a division in the Army of Northern Virginia during the entry into Pennsylvania; his men were a reserve force and marched from the Chambersburg area on July 2 to Gettysburg, where they of course they spearheaded the ill-fated assault on the 3rd now known as “Pickett’s Charge.” General Pickett’s movements are well known; at no time did he and his men march east of Gettysburg, let alone to New Oxford or all the way out to northwestern York County. The origin of the name “The Pickets” has nothing to do with the colorful Confederate general.

Q- Did Robert E. Lee ever visit York County? My grandpa used to tell that his grandmother gave a cup of cold water to the general.

A – Lee, like Pickett, never made it east of Gettysburg during the campaign. Many York County residents did out of human pity and charity give water, milk, eggs, butter, pies, and other food to the passing Confederates, including their officers, but not to “Marse Robert.” With the gray dust of the gravel roads caking their hair and beards, perhaps some of their mounted leaders resembled Lee and the farmer’s wife honestly thought it was Lee himself. Then again, it could have been a made-up story meant to entertain the children.

Q- Did General Early threaten to burn down York if the town did not surrender?

A- Early never issued any explicit threats to apply the torch to the town, although he did consider burning several railroad buildings and shops. However, he relented when it was pointed out that a number of civilian homes were in the same vicinity and the fire might spread to them. As he and his men departed on Tuesday, June 30, 1863, after being recalled west toward Heidlersburg, the general ordered a York printer to publish a broadside explaining his rationale in not burning these railroad properties. However, while Early never directly threatened York, he certainly was aware of the rumors that the Confederates intended to torch a town somewhere and he allowed those tales to circulate freely without immediately squashing them.

Q – I have a cannonball that has been passed down through the family. It was found along the road while my grandfather was plowing a field. Is it worth anything?

A – All too often dealers on eBay and antique shops sell “Civil War cannonballs” to unsuspecting buyers. Sometimes they legitimately believe these are the real deal, but, as with the fairly frequent stories of these being dug up in obscure places far from where the armies are known to have passed, often these are not cannonballs. They usually turn out to be steel, brass, or cast iron balls which were used in tumblers to crush rocks into gravel.

Q – My great-grandfather has told stories about his ancestors hiding the family horses in their cellar to keep them safe from the Confederates. Could that have happened?

A – Residents, if they received sufficient warning of Confederate foraging patrols in their area, often went to great pains to hide their horses and mules. Documentation exists for horses being hidden in woods, in ravines, on Round Top mountain, in the Pigeon Hills and the North Hills, on the Conewago range, and in orchards. If the farmers did not have time to “head for the hills,” at times they indeed tried desperately to save their animals with some unusual hiding places, including cellars and even rooms of the house. One man in Spring Garden Township hid his huge draft horse in his parlor; a patrol of Louisianans found it but not before the horse had did its business in the room and sprayed a nearby rosewood piano.

Do you have a Civil War question? Sent it to scottmingus@yahoo.com