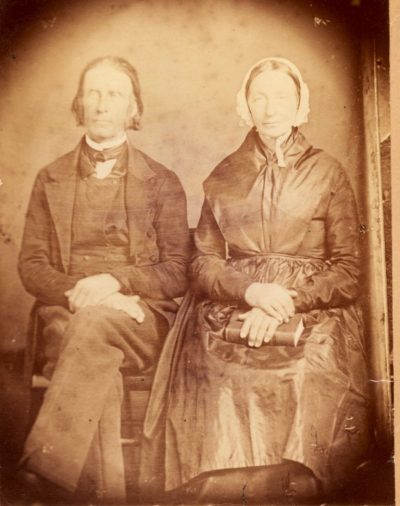 I have long been fascinated by the human side of the Civil War. In particular, I enjoy reading, researching, and writing human interest stories from the soldiers as well as the civilians they left behind on the home front. These citizens tried, as best as they could, to live normal lives despite the newspaper reports of the ongoing war and the occasional uncertainty for many in the South and along the southern borders of several Northern states if the war was coming to their doorstop. Ordinary people here in York County, Pennsylvania, went about their jobs, whether in factories and businesses or on the farm. Babies were born, marriages performed, and funerals preached. Life went on.

The civilians here in York County included Jacob and Anna Maria (Anstine) Miller of Red Lion. Cannonball reader Tom Brenner sent me an email with some information on his ancestors, as well as a link to his interesting website on his family history. The Millers, married in September of 1841, worked a farm that Jacob purchased from his parents. They raised seven children who were educated at a school that Windsor Township erected on the Miller homestead.

When the Civil War erupted in April 1861, the Millers still had four children who were under 10 years old. After Anna Maria passed away on July 3, 1862, Jacob continued on as a single parent, likely helped with the older kids. To read more of their family history, see Tom’s website linked above.

Feel free to send me photos of your Civil War ancestors who lived here in York County and their stories.