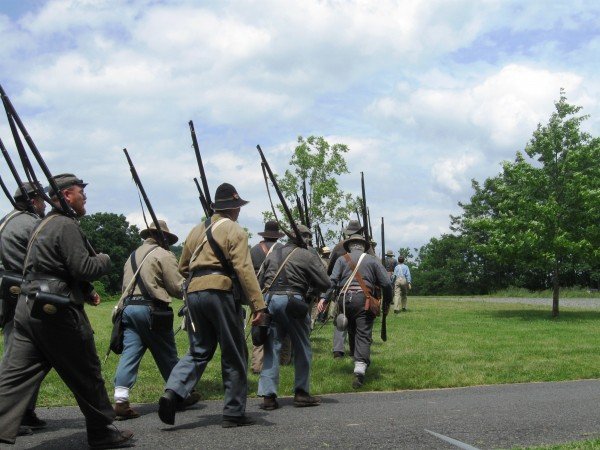 Confederate reenactors march into position for a sham battle at Neshaminy State Park.

I frequently  drive past a modest country grocery store at the intersection of Canal Road and Bull Road in north-central York County, near the border of Conewago and Dover townships. The site has been a store since the middle of the 19th century when a young merchant named Eli Quickel owned the facility. Confederate soldiers paid a visit to Quickel’s shop in late June 1863 and cleaned him out.

Here is Maggie’s note in its entirety…

“It was on the Sunday that our men heard of the Rebels being in York and will head for the river to cross the Columbia bridge that our men got there and set fire to it. The[y] had it burned before the Rebels got there. Peter Hoover got buried on that Sunday. Daddy was on the cemetery at the time the bridge burned. Peter Hoover was married to Daddy’s sister. His body was sent home from Norfolk Virginia. He was killed in a battle; they had no funeral just buried him.

The Sunday the rebels came out from York, one of my brothers and another neighbor said ‘let’s get on our horses and go someplace toward York to see if it is so.’ They did go and did not go [on] the public road and the rebels got them right there and made them ride along to show them the way to go to the bridge and when they saw the bridge burning they told my brother and this other man to go home and I can tell you they came and the neighbors all came together to make out to cross the river with their horses. The rebels stole all the farmer’s horses.

So my father and three more farmers hitched up in a plank wagon with bags of feed and did go up to Harrisburg and crossed the bridge there and came down along the river. My father was near Mount Joy with a farmer [who] helped to work.  They stayed till a week after the Gettysburg battle. Our wheat was all cut and on shock in the field close to the farm. I and my youngest brother hauled some in the barn on the wheelbarrow. One of my brothers [who] lived in the country had a little store with shoes and boots and groceries had baskets of eggs setting around and he had just one horse such a nice white and black mixed. He hid it; laid planks over the logs in his stall and had a lot of straw over them had an opening in the trough to feed him and water him then nobody looked for a horse. Then my brother had hid too. Rebels came to look for the horse and them came in the store; took boots and wanted eggs and ham for supper. They said they will not hurt her or the children.

Well then when the Gettysburg battle was over the dead and wounded laid on the field. They sent word all around for bread and applebutter and bandages. We had no bread wagons coming around. The women baked their own bread. My mother made yeast and baked in the night and so did our neighbor women. I and my sister did cut up worn out white sheets and pillow slips and rosled [rustled] them nice up. The next morning 4 spring wagons started for to take loads of things up to Gettysburg that brother had his horse hitched in his wagon did go along.

Then some days after that I and my nephew was to go for my brother’s horse. We was a little afraid they all said no rebels around no more. We got the horse. The boy did ride and I walked.  We had to pass a little woods, just a few trees. A school house stood there. We did look all around when we passed to go for the horse and did not see anything. Coming back we saw a soldier. I saw it is one of the Union boys. He came and ask where we want to go. We told and he held off. We afterward heard he was wounded and had runned off. I don’t know what became of him. We did not take the horse home. My brother had to come for him.

When the Columbia bridge was burned down it was on a Sunday. We had no Sunday School all about the rebels coming and all our big men and boys was in war. We was out in the field. We had such big ripe cherries. We saw a smoke come up and all day Sunday it was Colored people running out from York to get away from the rebels. They was afraid even though Lincoln made them free. One day 4 darkeys came to my mother’s yard and asked so nice if would give them some thick sour milk and bread. We had to go in our spring house for a crock of milk for them. They was glad and started off.” 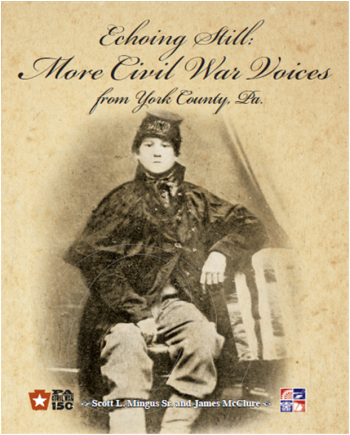 York County in the Civil War

Their “Echoing Still: More Civil War Voices from York County, Pa.” has been released as part of the 150th anniversary of the Battle of Gettysburg.

The new book captures more stories from original letters and diaries and newspaper accounts. The authors have interviewed descendants of those who fought in the war or lived in the Civil War era.

The 192-page book provides scores of stories from the decades before the conflict, the war itself and then about the fate of the veterans and their families after they returned.

The authors have arranged York County’s war stories chronologically through a series of vignettes, informed by mostly previously unpublished documents and oral histories.

The county, resting on the Mason-Dixon Line, sent about 5,000 men to fight in the Union Army. In the days before the Battle of Gettysburg, about 11,000 Confederate soldiers tramped on county soil.

“We have collected the rich oral tradition and written memories of York countians during the Civil War to preserve it for future generations so these stories are not lost forever,” Mingus said.

Mingus has written “Flames Beyond Gettysburg: The Confederate Expedition to the Susquehanna River, June 1863,” “The Louisiana Tigers in the Gettysburg Campaign” and several other Civil War books. McClure’s titles, “East of Gettysburg” and “Almost Forgotten,” tell about the Civil War in York County.

Their book will be available at the program.

The Stewartstown Historical Society is asking for your help with this program. If you have any Civil War artifacts or photographs that connect to this local area, we would like to display them during the program.

If interested, please call 717-993-5003 to leave a message, or email us at mailto:stewhist@yahoo.com, and we will contact you.

The event is free, but a free-will donation will be taken to help support the historical society.