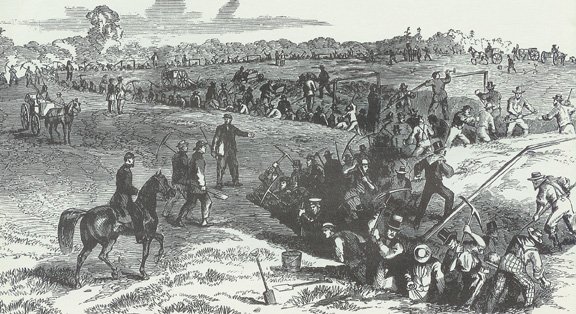 In early June 1863, persistent rumors spread throughout south-central Pennsylvania that the Confederate army planned to cross the Mason-Dixon Line and invade the state. Some believed that the incursion would merely be a cavalry raid, similar to J.E.B. Stuart’s October 1862 raid which came within 6 miles of Gettysburg and sent residents fleeing to safety. Others feared a much larger scale, with the worst case scenario Robert E. Lee’s entire Army of Northern Virginia marching unmolested to the state capital.

Many towns began organizing home guard units to protect their own regions, including more than 5,000 men who organized themselves in the Juniata River area. More than a thousand men began drilling in various places in  Lancaster County.

In York on June 23, David Z. Seip finished recruiting men for a company of volunteers in response to Governor Andrew G. Curtin’s initial call for emergency troops for a six-month period. Seip became captain of Company B, First Battalion, Pennsylvania Six Months Volunteers, a command organizing in Harrisburg. They were mustered into the service on June 29, joining with six other companies under Lt. Col. Joseph F. Ramsey to form the new battalion. Their comrades came from Tioga, Montour, Cumberland, and Lancaster counties, as well two companies of volunteers from Philadelphia.

Seip and his men would be busy throughout the summer. The Rebels indeed were coming toward Harrisburg. 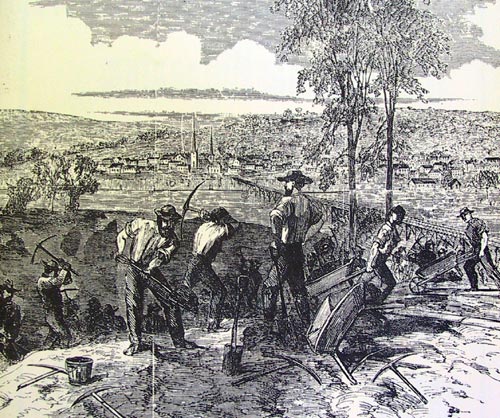 Governor Curtin and his military advisers had long known that the #1 defense of Harrisburg was the natural barrier of the Susquehanna River. It had few fords and easy crossing points other than a series of long bridges leading from Bridgeport (now Lemoyne) to the capital. Defending those bridges became of paramount importance to defensive plans. On June 11, Major General Darius N. Couch arrived from Washington to take command of the new Department of the Susquehanna, which spanned some 34,000 square miles from the Laurel Highlands eastward. Railroad men had begun building defenses on the Bridgeport side of the river, and now Couch and a group of engineers planned a series of forts and earthworks there.

The focal point became Hummel Heights, a commanding rise near Bridgeport which offered an excellent view of any oncoming Confederates. Work intensified on the earthworks with thousands of soldiers, including Captain Seip and his York Countians, at work by June 24, even as the Confederate army marched into Franklin County and occupied Chambersburg. Many of the soldiers were New York State Militia or New York State National Guard units, sent hastily by train from New York City, Buffalo, Albany, and other Empire State locations. Others were from various parts of Pennsylvania. A handful were from New Jersey.

The History of the First Battalion, Six Months Volunteers briefly mentions this early service: “The Battalion was at once placed on duty in and around the city of Harrisburg, and was kept busy day and night. It looked after the large amount of Government stores at Camp Curtin, and other points in the city. It assisted in building Fort Washington, on the heights above Bridgeport, on the opposite side of the river, and several times it was sent up the Cumberland Valley to resist any advance made by the Rebels.”

Remains of the earthworks (Fort Couch in particular)  are still visible in Lemoyne.

After the Rebels retreated from Pennsylvania following the Battle of Gettysburg in July, Captain Seip and Company B, along with companies F and G, received orders to travel to Gettysburg. There they “assisted there in the care of the Government stores that had been left on the field at the time of the battle.”

In early 1864, most of the company re-enlisted in what became the 187th Pennsylvania Infantry and served for the rest of the war. They saw combat as part of the Army of the Potomac’s actions in the Overland Campaign and the Siege of Petersburg. On June 25, 1865, Captain Seip received a promotion to major of the regiment. He mustered out on August 3, 1865. Shortly thereafter, Seip and his now civilian comrades finally returned to York County. 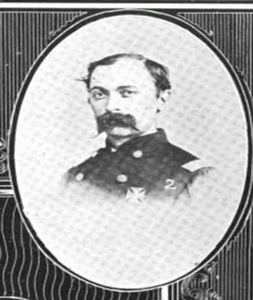 David Z. Seip was born on May 4, 1837, in the borough of York. He was the son of Emanuel and Ester (Zorger) Seip. At the time of his enlistment, he worked as a cigar maker. The 1860 Census indicates he lived with and/or worked for master cigar maker Thomas Holland in York. Seip stood 5′ 10″ tall and had black hair and hazel eyes, according to researcher Dennis W. Brandt’s fine database of York County soldiers on-line on the website of the York County Heritage Trust.  He was single. When he enlisted, he gave his age as 24, but he was really 26 according to Dennis.

After the war, Seip moved to Philadelphia and established a business at 8 South Fourth Street where he sold manufactured and sold tobacco and cigars. He frequently attended reunions of the Survivors Association of the 187th Pennsylvania.

Seip died on his birthday in 1911 and is buried in Greenmount Cemetery in York.