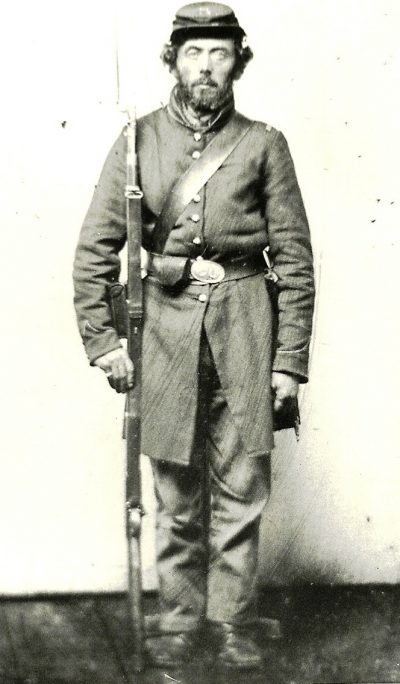 One of the most gratifying things for me as a Civil War buff is to receive e-mails from fellow descendants of the soldiers. I had several ancestors serve in the Union army from Ohio and West Virginia, including my great-great-grandfather Sisson who was a drummer in the 51st Ohio Volunteer Infantry. Other relatives charged the Sunken Road at Antietam and stormed Cemetery Hill at Gettysburg as reinforcements.
Charlie Zilch, a Cannonball reader from New Hampshire, graciously contacted me to discuss his interest in the 166th Drafted Militia, a nine-months regiment raised in south-central Pennsylvania and organized in York from October through December 1862. Among the new soldiers was Charlie’s great-great-grandfather, Pvt. Conrad Zilch of Company E. The army initially misspelled his surname as “Zelch.”

I am interested in assembling as many photographs of members of the 166th from York County as can be located. I hope to start a webpage with these photos and to receive stories from these veterans, copies of their diaries or journals, letters, etc. Charlie Zilch would also like to locate any photographs in particular from Company E, his ancestor’s comrades in arms. We are not aware of any photos taken of the entire company, but if one exists, please contact me.

Here is more information and some documentation on Pvt. Conrad Zilch.

Family records indicate that Conrad Zilch was born about May 1818 in Hesse Darmstadt in southwestern Germany. Like so many other residents of the Palatine region of Germany (including my own forefather who left the Heidelberg area in 1709), he immigrated to the United States, departing from the bustling port of Bremen. He arrived in New York Harbor on May 16, 1840, aboard the sailing vessel Vesta.
Zilch settled in York County, Pennsylvania, an area with a rich culture of German immigrants and their descendants. Terrain-wise and climate-wise, the fertile and hilly region reminded them of their homeland. Zilch became a farmer and a tanner. On November 24, 1849, he married Ursula Wehr, a recent immigrant from Germany. The Zilches raised a large family and began attending St. Mary’s Roman Catholic Church after it was constructed in 1852 on S. George Street.

Some twenty years after Conrad Zilch arrived in the U.S., his adopted country split apart in a civil war. At the age of 45, he was drafted into the army and mustered into Company E of the 166th Drafted Militia on November 8, 1862. Army records compiled by researcher Dennis W. Brandt indicate that Zilch was 5′ 6″ in height, with black hair and gray eyes.

Zilch and his regiment took the Northern Central Railway to Baltimore and then moved to Washington, D.C. From there they departed for the war zone, serving in Newport News and then Suffolk, Virginia, in December. The 166th was attached to Foster’s Brigade of the Union Seventh Corps, Dept. of Virginia, to April 1863 and then to the 2nd Brigade, 1st Division until July 1863 when the regiment’s term of service expired and the men were discharged.

Zilch returned home to York but decided to move to Erie County in northwestern Pennsylvania to the town of Corry. There he and several of his descendants settled and prospered.

Conrad Zilch died suddenly of a heart attack on December 6, 1893. He is buried in St. Elizabeth’s Cemetery in Corry, Pa. 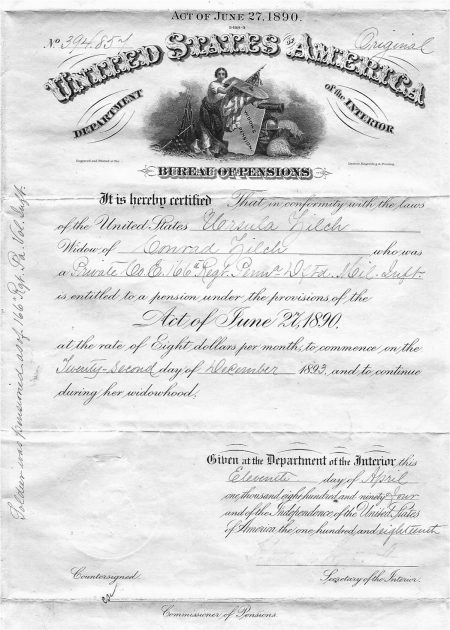 Ursula Zilch filed for a widow’s pension after her husband’s death. The handsome certificate shown above remains in the family’s possession.

If any Cannonball readers have photographs of members of the 166th Pennsylvania, particularly Company E members, please let me know!
All images courtesy of Charlie Zilch and are used with written permission.