Alone or in groups, enslaved Black people left captivity in the South and took routes across the Mason-Dixon Line that passed through York County, Pennsylvania. They sought freedom in the North, often with an eventual goal of reaching Canada, where the British government refused to extradite them.

To many Southerners, they were fugitive slaves and lawbreakers. Many were young men. Some were family groups with children in tow. Others were strangers who banded together for protection and a shared sense of purpose. Most eventually found their way to safety. Some did it all on their own, using their wits and following the North Star or other landmarks. Others received assistance from the conductors (then called agents), Black and white, on the secretive and unlawful Underground Railroad.

The loose network of concerned citizens offering safe houses, barns, and churches spanned generations from the period after the American Revolution through the Civil War. Their assistance to freedom seekers was illegal, often violating the Fugitive Slave Law of 1793 (replaced by stronger legislation in 1850). Yet they persisted, often involving family members and friends, despite the risks of fines and prison if caught and convicted.

In York County, there were scores of such covert agents over the life of the Underground Railroad. Early on, anti-slavery members of the Religious Society of Friends (Quakers) were the primary source of comfort and aid to runaways from the South. They included several Quakers in Delta and Fawn Grove, Jonathan Jessop and James Chalfant south of York, Amos Griest and Joel Fisher in York’s downtown, and Samuel Willis to the north of town.

Farther north, Israel and Joseph Garretson and Joseph Wickersham led the Quakers’ efforts in rural Newberry Township. Dr. Webster Lewis in Lewisberry and his son Dr. Robert N. Lewis in Dover were active for a period. To the east, along the Susquehanna River at Wrightsville were Jonathan and Susanna Mifflin and, later, their son Samuel.

Over time, many non-Quakers also became involved as conductors, including York constable William Yocum, former U.S. congressman Charles A. Barnitz, leading Hanover businessman Jacob Wirt, stagecoach line operator Israel Gable, and a host of others. They often worked hand-in-hand with the Quakers and local free Black people to move freedom seekers to the Susquehanna River and across to Lancaster County where other agents awaited. Some anti-slavery churches and their congregants offered aid.

Following the passage of the Second Fugitive Slave Law in 1850, harboring freedom seekers became much more dangerous. Yet, some passionate residents stepped up their secret involvement. An enterprising group of free Black men and women led the effort in the decade before the Civil War. Freedom seekers coming to Shrewsbury along the Susquehanna Trail or the Northern Central Railway found shelter with Samuel and Mariam Berry, both formerly enslaved in Maryland. Fiddle-playing Bill Piper fed and sheltered strangers in his modest cabin near Hanover. In southeastern York County, Henry Grant led a determined group of farmers and ferrymen along the Susquehanna.

When safe, Goodridge’s associates Cato Jourdan and Carter Brown transported refugees to the river. Often, the chosen mode of transportation was the 13 railcars of the Reliance Line, Goodridge’s private fleet he used to move lumber, goods, and human “cargo” to Philadelphia. Fellow Black businessmen William Whipper and Stephen Smith in Columbia were also heavily involved in the covert rail transportation of “freight” and “parcels.”

Most York Countians ignored the runaways, while others helped recapture them for the promised reward money.

Some slave catchers became quite proficient; others not so much, such as a quartet of Conewago Township relatives that shot a man near Lewisberry in a bungled attempt to recapture him. At times, freedom seekers carried weapons, as illustrated by the York Gazette of October 2, 1860, “On Saturday night last, Henry Wagner, of this borough, was shot by a runaway negro from Maryland, named Little, near Rhineberger’s corner, in S George street. The implement was a shotgun.” No other details were available.

Most Underground Railroad workers toiled anonymously, keeping their identities and actions a secret to avoid detection. Few kept written records. We are indebted to historian Dr. Israel Hummer Betz (1841–1918) for documenting several of these names, although some people he mentioned remain obscure or uncertain.

No one knows the number of formerly enslaved persons who local Underground Railroad workers may have illegally escorted through York County, but it likely exceeded a thousand, perhaps many more.

To read more about the local Underground Railroad, please pick up a copy of either (or both) of my two books on the subject. The most recent one is a series of relatively short biographies of the 25 or so leading conductors in York County. It is available in York from TG Books, the York Emporium, and the York County History Center, and in Columbia at Columbia Crossings. As with nearly all of my books, Jim Schmick at Civil War and More in Mechanicsburg also carries this title. I will be signing books at this store (10 S. Market Street in Mechanicsburg) on Saturday, April 3, 2021, from 10:30 a.m. until 1:00 p.m. 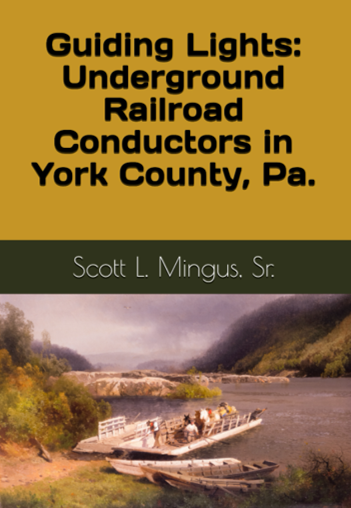 The earlier (and far more comprehensive book) is still available from the York County History Center.