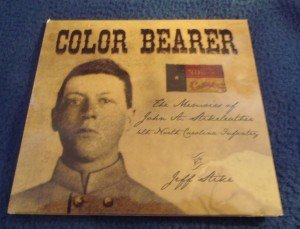 Jeff Stike is a country singer/songwriter/guitarist from the scenic Peach Bottom area in southern York County, Pennsylvania.He grew up in northern Maryland and had a strong interest in military history and country music. He played with various bands, was a studio musician, and began writing his own songs. He merged his two passions into an album of original songs based on the battle of Gettysburg, including a catchy song on the June 28, 1863, burning of the Wrightsville-Columbia Bridge. More on that album later…

One of Jeff’s ancestors, a great-great-granduncle named John A. Stikeleather, served in the Civil War in the 4th North Carolina Infantry. That regiment served in the Gettysburg Campaign in Ramseur’s Brigade of Rodes’ Division, and was among the forces which occupied Carlisle in the week before the battle of Gettysburg.  Stike (whose great-great-grandfather dropped the “leather” from his surname) located his ancestor’s war remembrances in the archives of the University of North Carolina.

He decided to narrate the most interesting accounts and set them to music, strumming his guitar as he retold his Confederate soldier ancestor’s tale. 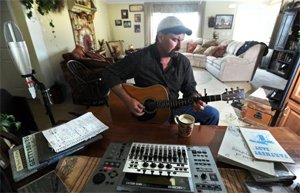 Country musician Jeff Stike is shown at his home in Peach Bottom.

John A. Stikeleather was born in North Carolina in 1840. At the beginning of the War Between the States, the young farmer enrolled in the Iredell Blues, a hastily organized company of volunteers which soon became Company A of the 4th North Carolina. He saw action in numerous battles; saw several friends killed or maimed in action; and served under several prominent Confederate generals.

Twenty years after the war Sergeant Stikeleather began writing a compelling memoir of his service in the late conflict. Entitled, “Recollections of the Civil War in the United States,”  by J. A. Stikeleather, Olive, N.C., May 27, 1909. In 1942 the widow of his commanding officer, General Bryan Grimes, donated the handwritten document to the University of North Carolina. It and a 1993 transcription are now stored in the Bryan Grimes Papers, 1730-1929 in the Southern Historical Collection at the Louis Round Wilson Special Collections Library. It is this old personal memoir which Jeff Stike has recently turned into a fascinating modern CD. 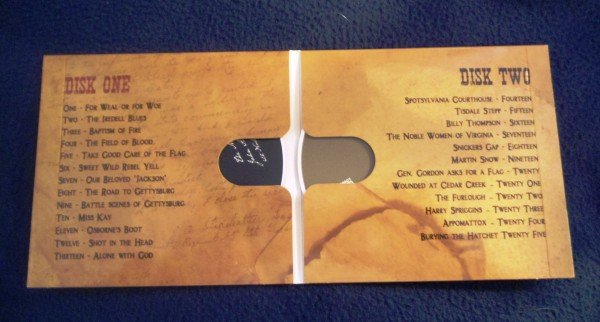 Jeff narrates Stikeleather’s recollections in a rich, resonant deep voice which nicely augments his ancestor’s verbiage. He accompanies the narration with his guitar picking, evoking memories of an old Civil War soldier retelling war stories around a campfire to his friends and descendants.

Stikeleather and his Tar Heel regiment served in many of the key early battles of Robert E. Lee’s Army of Northern Virginia, including First and Second Manassas, Sharpsburg, Fredericksburg, Chancellorsville, and Gettysburg. His memories of the invasion of Pennsylvania and the subsequent fighting at Gettysburg are of particular interest.

Among Ensign Stikeleather’s reminiscences are his several 1864 chance encounters with a Union prisoner of soldier from the 95th Pennsylvania named Harry Spriggins, who hailed from York County. They would exchange a pair of letters long after the war. [Note that no soldier by the name of Harry Spriggins appears in the database of York County Civil War soldiers nor is a man by that name listed on the roster of the 95th Pennsylvania, a regiment primarily raised in Philadelphia, where Spriggins resided after the war at the time of his antebellum correspondence with Stikeleather]. That does not detract from the interesting anecdote. 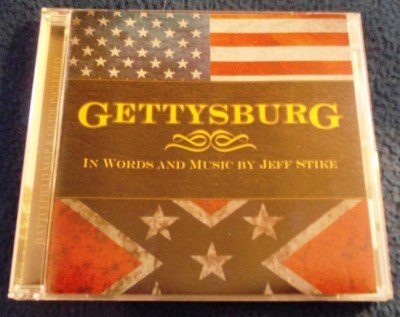 Jeff Stike’s other Civil War CD is a collection of his own compositions drawn upon stories from the battle of Gettysburg, as well as Brandy Station and the skirmish of Wrightsville. The songs are well written and composed, with strong vocals and accompanying guitar music. Jeff takes a bit of artistic license in the Wrightsville song (promoting Colonel Jacob Frick and Lieutenant Colonel William E. Sickles each to the rank of general, but the verses sounds better with them designated as generals!). The album is well worth a listen. 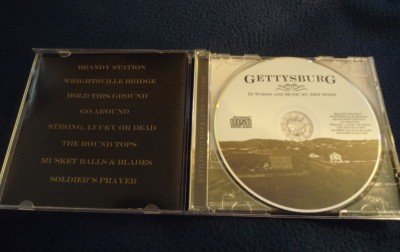 Jeff Stike’s website is filled with biographical material, background information on his songs, and ordering information.