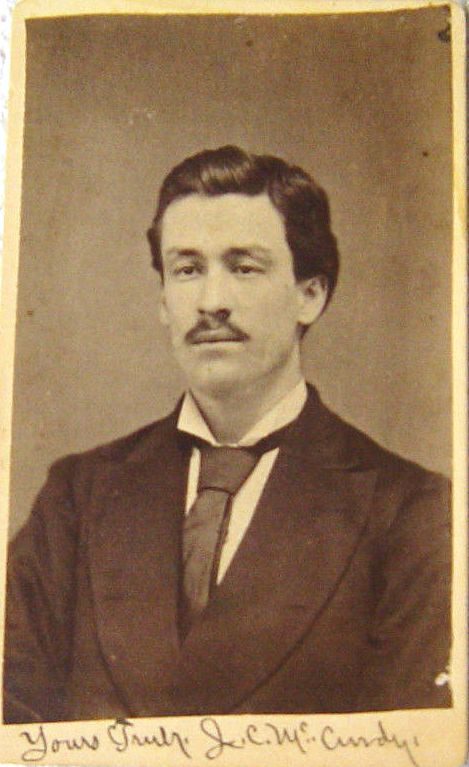 James Christopher McCurdy moved around a lot in his long life and apparently accomplished quite a bit. He was a soldier, school teacher, nationally known Bible publisher, and insurance broker. He lived in several of America’s most important cities before marrying and settling down in Montgomery County, Pennsylvania, where he was an influential leader in his local Presbyterian Church and in his community and veteran affairs.

A 19-year-old student at Millersville Normal School (a teacher’s college which is now Millersville University in Lancaster County), he enlisted in the Union army on August 7, 1862, in Camp Simmons. Two days later in Harrisburg, he was formally mustered as a private into Company I of the 130th Pennsylvania for a term of nine months. After training, the Peach Bottom native and his regiment served in the defenses of Washington, D. C. before joining the Second Corps of the Army of the Potomac before the deadly battle of Antietam. After serving briefly in Harper’s Ferry, the 130th was later involved in the Fredericksburg Campaign in December. McCurdy survived both fights.

Like so many other Civil War soldiers, his biggest battle came against disease and exposure, not against the enemy bullets. According researcher Dennis Brandt’s database at the York County Heritage Trust, McCurdy was hospitalized on December 13, 1862, and spent the entire winter recuperating in a convalescent camp. He finally returned to active duty with his regiment on May 7, 1863, shortly before his term of enlistment expired. He was mustered out on May 21 with his regiment.

However, his service to his country and his community was not over yet. 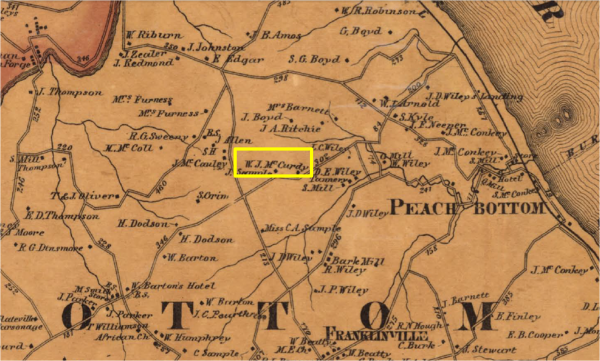 This 1860 Shearer & Lake map of York County PA shows the location of the McCurdy family farm where John Christopher grew up.

After receiving his honorable discharge shortly before Thanksgiving in 1863, the young teacher returned to school for additional classwork. However, within months he decided that he was not yet finished with soldiering. On July 15, 1864, in Harrisburg McCurdy enrolled in the 194th Pennsylvania Infantry. As a veteran, he was mustered into Company D on the 18th with the rank of corporal. He received an honorable discharge on November 6, 1864.

Then, his wanderlust took over. 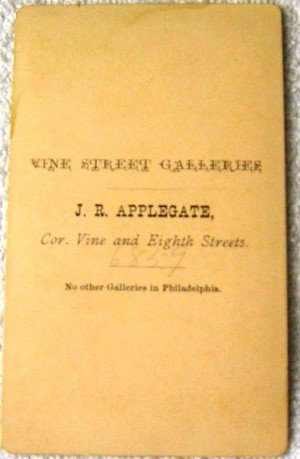 J. C. McCurdy’s photo dates from the late 1870s/early 1880s when he lived in Philadelphia. J. R. Applegate took the picture at his studio downtown.

McCurdy was active in veterans affairs and served a term as president of the 130th Pennsylvania Regimental Association.

He died in Ardmore, Pa., on April 22, 1927, and is buried in West Laurel Hill Cemetery in the town of Bala Cynwyd, Montgomery County.

JAMES CHRISTOPHER MCCURDY – A member of an old Pennsylvania family whose line traces back more than a century in this State, the late James Christopher McCurdy, born in Peach Bottom Township, York County, May 16, 1843, died in Ardmore, April 22, 1927, son of William James and Alice (Fulton) McCurdy, was once the head of a well-known firm of book publishers, and later engaged in the insurance business in Philadelphia. He was a veteran of the Civil War, for more than forty years an elder in the Presbyterian church, and for nearly a half century the secretary of the Lower Merion Building and Loan Association, which he helped organize.

Mr. McCurdy’s grandfather, James McCurdy, belonged to the Ulster Presbyterian Church in Ireland. He came to America in 1813, having broken away from that denomination before he left his native land. He was accompanied by his family and settled in York County of this State, where he organized a Baptist church.

James Christopher McCurdy’s father, William James McCurdy, was born in Peach Bottom Township, where he taught school and later was a farmer. He was active as a member of the Sons of Temperance. His wife was Alice Fulton, daughter of John Fulton, and a relative of Robert Fulton of steamboat fame.

James Christopher McCurdy received his education in the schools of his neighborhood and at the Millersville State Normal School. In the fall of 1861 he taught school in Lancaster County. He returned to school for a time in order to supplement his studies, and was in the midst of his course when he left to serve a nine-months’ enlistment as a volunteer in the Union army in the Civil War. He was assigned to the 130th Regiment, Pennsylvania Volunteer Infantry, whose members had handled guns but a month when they participated in their first battle, Antietam. Mr. McCurdy also fought in the battles of Fredericksburg and Chancellorsville. His regiment suffered extremely, many being wounded or killed. Though he was but nineteen years of age, he was made a non-commissioned officer. At the end of his term of enlistment, in the winter of 1863, he resumed the teaching of school, and continued at this work until 1864, when he reenlisted in the army. He was finally discharged in that year.

Following the war, Mr. McCurdy formed a partnership with Peter Zeigler, a war comrade and boyhood chum, who later became his brother-in-law, and they organized the publishing house of Zeigler & McCurdy, with offices in St. Louis, Missouri; Cincinnati, Ohio; Chicago, Illinois, and Philadelphia. Their religious and secular books had a nation-wide sale, and the house for years enjoyed great popularity. They did an especially large business in the sale of Bibles and works on domestic life which they published.

In 1872 Mr. McCurdy and his partner dissolved the firm, and the former organized the firm of J. C. McCurdy & Company, which carried on its publishing business in Philadelphia and other cities until 1896. In the latter year he formed the insurance company known by his name in Philadelphia, and which now is under the direction of his son, Frank McCurdy. In 1883 Mr. McCurdy assisted in the organization of the Lower Merion Building and Loan Association, of which he was the secretary from 1887 until the time of his death. In 1905 he retired from active commercial pursuits.

In 1875 Mr. McCurdy became a member of Cassia Lodge, No. 273, Free and Accepted Masons, which, in 1890, elected him secretary, an office that he held for the rest of his life. This is one of the largest Masonic bodies in the State, having more than 1,000 members, and with its remarkable growth Mr. McCurdy had much to do. He was also affiliated with Montgomery Chapter, Royal Arch Masons. In 1864 he joined Mount Hebron Lodge, No. 516, Independent Order of Odd Fellows, of Delta, Pennsylvania, and in 1879 withdrew and joined Merion Lodge, No. 210, of the same order, at Merion Square, Pennsylvania, having served the latter body as Noble Grand and trustee.

He was a member of Post No. 77, Grand Army of the Republic, of which he was commander in 1918, and in the following year he was an aid on the staff of the commander of the Pennsylvania Department. At the time of his death he held the office of adjutant of Post No. 77.

He was a devout member of the North Presbyterian Church, Philadelphia, from 1870 to 1873. In the latter year he removed from that city to Merion Square, near Gladwyn, and helped reorganize the Lower Merion Presbyterian Church, the first church of that denomination to be formed in Lower Merion Township, its edifice having been erected in 1876. He was Sunday school superintendent there for thirty-five years, and was an elder of the church until 1909, when he removed from Merion Square to Ardmore, and in 1911 was elected elder of the Ardmore Presbyterian Church. He was a staunch member of the Republican party from the time of its organization, and always took great pride in the fact that he cast his first vote for President Abraham Lincoln.