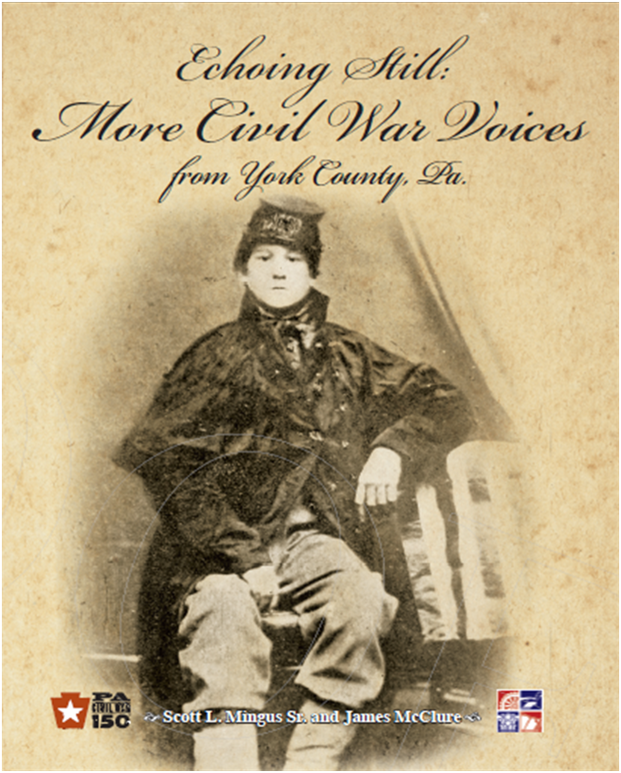 In this second installment of a series of articles on Civil War personalities from York County, I want to shift the attention from officers such as Granville Haller to the enlisted men. Hundreds of boys and men from York County fought in the Civil War, the vast majority serving as common infantrymen. They were pre-war farmers, store clerks, mechanics, and students whose lives were “touched with fire” through their military service. Most came home to tell about their exploits around the Grand Old Army (G.A.R.) halls and at other social gatherings. However, some gave their last full measure of devotion to their country. Others were wounded, maimed, or invalided by the war.

Here is the story of one Paradise Township teenager, who was present at some of the war’s fiercest combat. He escaped significant injury from Rebel bullets on Virginia battlefields, only to indirectly become a casualty of the Confederate invasion of York County.

Edward Webster Spangler was a typical York County country boy. He was born in rural Paradise Township on February 23, 1846. He helped with chores on his widowed mother’s small farm during the planting, cultivating, and harvesting seasons, spending the four winter months attending a local public school. Hating farm work and having no desire to spend his life as a farmer, he was able to enroll in the York County Academy, a precursor to today’s York College. After a year of study, he secured a job as a clerk in one of York’s leading dry goods merchants.

The Civil War had been raging for more than a year when young Spangler decided to enlist in the army. In August 1862, at the age of 16, he was mustered in as a private in Company K of the 130th Pennsylvania Infantry. Two months later, he “saw the elephant” (entered combat for the first time) at the bloody Battle of Antietam. Led on by Colonel Henry Zinn, the new regiment was part of the massive and ill-fated assault on Confederate positions in the Sunken Road. One-third of Spangler’s comrades in Company K were killed or wounded in the series of attacks. During the prolonged fighting, Spangler fired off the eighty rounds of ammunition he had been issued. Like so many other soldiers, he scrounged for extra ammo from the cartridge boxes of dead comrades. He picked up ten more rounds and had fired all but two when the 130th was relieved and sent to the rear lines to rest and regroup. During the firefight, the stock of his rifle was shattered by a Confederate bullet.

In the early winter, Spangler, now a battle hardened veteran, participated in yet another bloody assault. His Second Corps division was among the first troops launched by Major General Ambrose Burnside at Confederate defenses on Marye’s Heights beyond Fredericksburg. Murderous volleys from Rebel guns killed Colonel Zinn and mowed down many of his soldiers. Spangler again escaped unharmed to fight again, this time on May 2, 1863, at Chancellorsville. His regiment was among the reinforcements rushed to close a gap in Union lines. Fighting raged through the night and into the next morning, when Spangler’s brigade was forced back, losing its commander, General Hays, as a prisoner of war. For a third time, the teenager came out of major combat without a scratch.

When the regiment’s term of enlistment expired shortly after Chancellorsville, Ed Spangler returned home to York County. He was appointed as a deputy U.S. Marshal and never expected trouble from the Confederates again. However, thousands of Rebels passed through York County in late June and early July, leaving behind hundreds of broken down, played out horses. As Spangler approached one abandoned horse, the frightened animal suddenly lashed out, kicking Spangler in his leg and badly breaking it. Incapacitated and now unfit for the rigors of duty as a marshal, he reluctantly resigned his peace officer’s badge and returned to civilian life.

The Confederates had unknowingly put him out of government service but instead sent him into a life of ease and comfort. Ed Spangler returned to school, studied law, and became a leading attorney and wealthy newspaper owner, a lucrative career move caused by the kick of an abandoned Rebel horse.