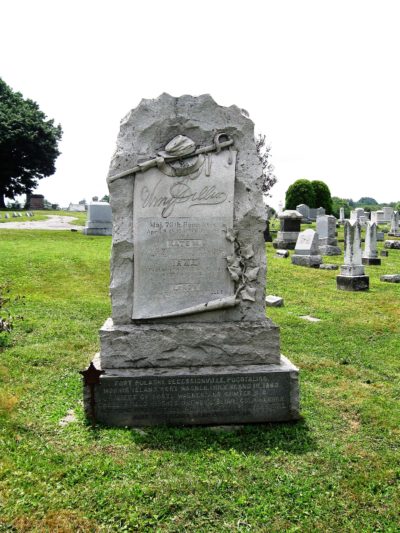 This impressive headstone in Mount Olivet Cemetery in Hanover, Pennsylvania, commemorates the brief life of one of York County’s many Civil War veterans, Major William Slyder Diller of the 76th Pennsylvania Volunteers, also known as the “Keystone Zouaves”. During his three years in the Union Army, Diller saw action in several significant engagements in Virginia, Georgia and South Carolina, including participating in the unsuccessful attacks on Fort Wagner (made famous in modern times through the Denzel Washington / Morgan Freeman movie Glory).

So, who was William Diller? 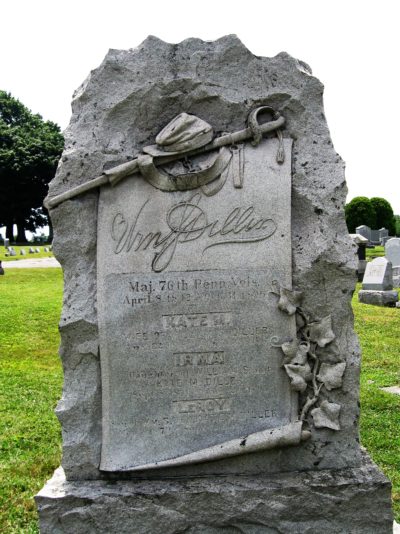 William S. Diller came from a very large and prominent family in Hanover. He was one of several sons of Simon Diller, Sr. and was born on April 8, 1842. When the Civil War erupted in early 1861, William and his brother Cyrus became recruiters, persuading neighbors and family members to enlist in what became Company D of the 76th Pennsylvania (the regiment also included a company from York commanded by Captain H. C. McEntyre). Cyrus Diller was the company’s first commander; he would later be the major of the regiment. Another brother Luther Yost Diller later was the captain of Company D, which was raised in Hanover and Conewago Township in neighboring Adams County. Simon J. and Emmanuel Diller were also lieutenants during the war. Brothers Isaiah and Adam were too young to serve.

William Diller was promoted to first lieutenant on October 16, 1861, and saw combat at Fort Pulaski, Successionville, and Pocotalico in October 1862. He was subsequently elevated to captain on November 7, 1862. He fought in July 1863 at Fort Wagner, South Carolina, before the regiment was redeployed to Virginia in 1864. He subsequently served in the fights at Chesterfield Heights and Drewry’s Bluff during the Siege of Petersburg, as well as the mine explosion and the ensuing Battle of the Crater. His unit also assisted in building the wooden platform for the famed mortar “Swamp Angel”. He was promoted to major on June 12, 1864, and took command of the 76th Pennsylvania, which was by then in the Second Brigade of the Second Division of the Tenth Army Corps.

Not long after being promoted, Diller was badly wounded in mid-August at the Second Battle of Deep Bottom, where his brigade commander, Lieutenant Colonel William B. Coan of the 48th New York Infantry, stated in his official report “Too much praise cannot be awarded to Major Diller, commanding Seventy-sixth Pennsylvania Volunteers… for gallantry displayed during the affair.” It was not the first time that Diller had received praise from Coan, who had previously written earlier in the campaign, “It is also proper to state that Lieutenant-Colonel Pennypacker, commanding Ninety-seventh Pennsylvania Volunteers; Major Diller, commanding Seventy-sixth Pennsylvania Volunteers… as well as the other officers and men generally, behaved with great gallantry.”

After being stabilized, Diller was taken to the Officer’s General Hospital in Fortress Monroe on the Virginia coastline. There, a contract surgeon named Dr. Charles S. Russell treated him and more than a hundred other wounded officers. Russell arranged to have photographs taken of his patients over a three-month period from August through November 1864, and an album with ninety-seven of these portraits, including Major William S. Diller, recently was offered for sale for $28,200.

Diller mustered out on November 29, 1864. After the war, he moved to New York City, where for many years he served as an inspector and deputy collector in the Customs House. He was active in the Masonic Lodge and other civic organizations, and moved from the city to rural Cohoes, New York, where he worked for a manufacturing concern. On April 2, 1885, he joined the New York chapter of the Military Order of the Loyal Legion of the United States (MOLLUS), one of the leading fraternal organizations for former officers of the Union Army. Several of his brothers stayed in the Hanover area, where Cyrus and Emmanuel engaged in the railroad business. Simon Diller, Jr. ran the town’s Diller House hotel.

OBITUARY 1: Major William S. Diller died at his residence, 76 West Eighty-second Street, Saturday, aged fifty-four years. He was one of five brothers, all of whom were commanding officers in the Union Army. Major Diller enlisted at the President’s first call for troops, and entered the war as Second Lieutenant of Company D, Seventy-sixth Pennsylvania Volunteers. He was mustered out of service after being disabled at the battle of Cold Harbor. His service was principally in South Carolina and Georgia. After the war, Major Diller engaged in the manufacturing business in Cohoes. He leaves a wife and son. His body will be cremated at his request at Fresh Pond, L. I. Tuesday at 2 o’clock.
Source: New York Times, November 2, 1896.

OBITUARY 2: Major W. S. Diller, who, after an illness of a few months, died on Saturday, at his residence in New York City, was one of five brothers, all of whom served as commissioned officers in the Union Army during the late war of the rebellion. Mr. Diller was, until the time of his death, commander of the Keystone Zouaves (seventy-sixth Pennsylvania volunteer infantry), and companion of the military order of the Loyal Legion, New York Commandery. Deceased was born in Littlestown, this county, April 8th, 1842. When the war began he assisted his brother Cyrus in raising a company, which left Hanover and was attached to the Seventy-sixth Pennsylvania Regiment. At the second Deep Bottom fight Major Diller received a wound that nearly proved fatal, and was invalided to Fortress Monroe, where, after recovering, he was detailed on a general court martial. Despairing of ever being able to resume active service, Major Diller, at his own request, was honorably mustered out. February, 1865. As the Major was a believer in cremation, his widow will carry out his request, and two of his comrades accompanied the body to the crematorium. A wife and one son survive him. The Major’s wife was formerly Miss Kate Metzger, of Hanover.
Source: New Oxford Item – New Oxford, Adams Co., Pennsylvania – Friday, November 6, 1896

His personal papers were donated in 1910 to the Historical Society of Pennsylvania by his descendant Leroy Diller, an officer in the U.S. Navy and graduate of the Naval Academy.