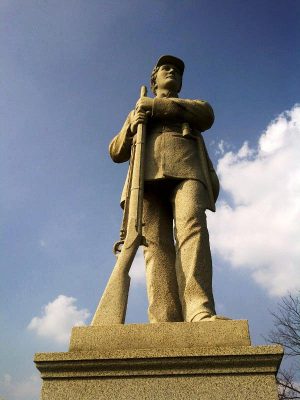 The anguished cry from a Southern soldier touched the heart of a Union soldier from York County during the battle of Antietam. In the summer of 1862, Edward Fisher was a blacksmith and laborer living in the Peach Bottom area of southeastern York County. He had answered the call to arms in August and enlisted as a private in the 130th Pennsylvania, a new regiment being recruited for service in the Union Army. Many in its ranks were York Countians.

They “saw the elephant” (saw their first combat) at Antietam on September 17, 1862, just outside of Sharpsburg, Maryland.

The savage fighting stunned the nation. It remains to the present time as the bloodiest single day of combat in United States history. Almost 23,000 men became casualties, including Richard Smith, one of Fisher’s best friends.

Here is the story of Fisher’s involvement at the battle of Antietam, as taken from Jim McClure’s and my book Civil War Voices from York County.

Edward Fisher, a laborer and blacksmith from Peach Bottom in southeastern York County, enlisted in the 130th Pennsylvania.

That regiment boasted many “squirrel hunters and duck shooters,” who knew how to handle weapons.

In fierce fighting at Antietam, Fisher watched his friend Richard Smith die in the ill-fated attack on Confederates entrenched in the Sunken Road. Not long afterward, Fisher spotted two young Rebels approaching. Instinctively, he raised his rifle and prepared to fire at the foremost soldier.

Fisher refrained, despite his anger and grief over his comrade’s death. He took the Southerners prisoner and passed them back to the provosts.

Returning to the front line, he experienced “one thing I would not like to do again. I was loading and firing so fast among the hail of bullets and shell etc. that I did not notice where I was until I saw the Johnnys on the right of me in a corn field loading their guns, could see them ram the cartridges plain. I was between the two lines.” His own line was behind him, “up on the side of the hill.”

He learned that the 130th had fallen back to the Roulette farm, where he found them late in the evening. The exhausted York County boys slept in an open field for two nights.

On September 19, the regiment drew the grim assignment of burying the dead. The men exchanged their rifles for picks and shovels, and at noon commenced digging long burial trenches to inter dead Confederates.

“They were in an awful condition; all bloated and gurgled like a wash tub full of water,” Fisher recalled. “When they were moved the odor was something almost unbearable.”

Fisher was relieved when the gruesome task ended, and the 130th Pennsylvania marched back to camp near the Roulette house.

Three days later, the regiment departed Sharpsburg and marched toward Harpers Ferry. They waded across the Potomac River.

“The water was up to our waists so that we had to hold our cartridge boxes up to keep our powder dry and our hard tack from getting soaked,” Fisher remembered.

As the men forded the shallow river, the “splendid” regimental band of the 14th Connecticut serenaded the soldiers with the popular tune Jordan is a Hard Road to Travel.

After setting up camp on Bolivar Heights, they found tents left behind by other Union units captured earlier in the month.

With shelter and food, Fisher and his comrades took time to sightsee. They visited the old school house where abolitionist revolutionary John Brown had secreted arms for a planned slave rebellion back in 1859.

It was a welcome change from the horrors of Antietam.”