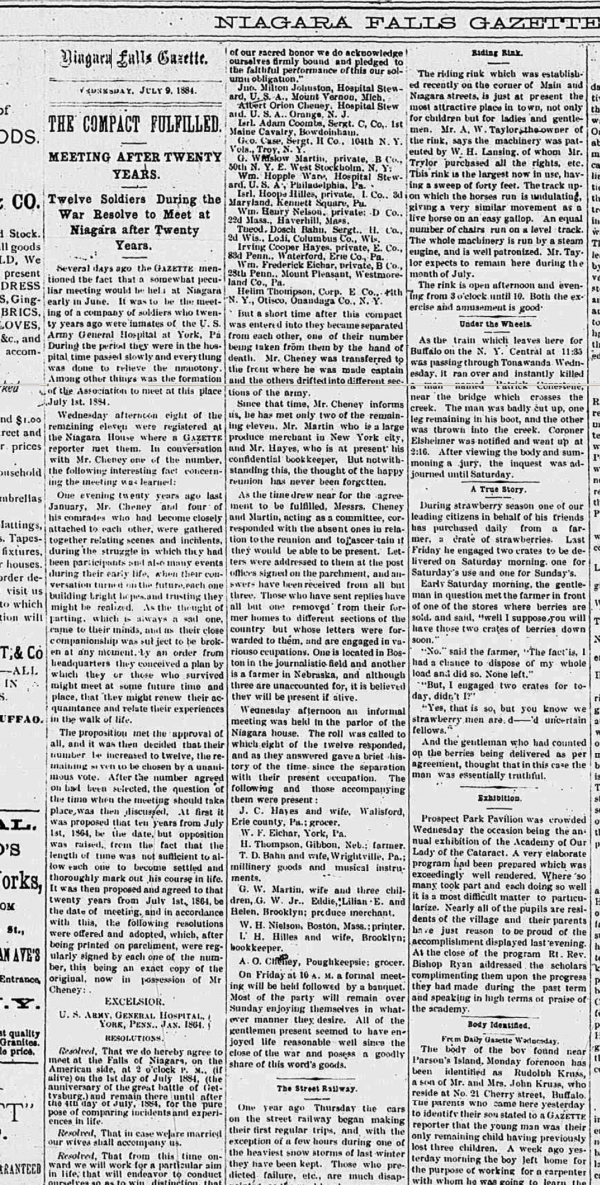 In Part 1 of this brief 2-part series, I mentioned the Civil War story of a group of 12 patients and stewards at the U. S. Army General Hospital in York, Pa., making a pact to meet at Niagara Falls in 1884, twenty years after they signed the resolutions. One member died in the war, three were unavailable for other reasons, but the remaining eight men indeed made it to the Falls for a 20-year reunion. Two of the veterans were from York County – William Frederick Eichar from York Borough and Theodore Dosch Bahn from Wrightsville.

The above newspaper clipping from the Niagara Falls Gazette, July 9, 1884, recounts their reunion. The writer concluded that “All of the gentlemen present seemed to have enjoyed life reasonable well since the close of the war and possess a goodly share of this world’s goods.”

Here is some more information on Captain Eichar, taken from Gibson’s History of York County, Pa.

“Captain William F. Eichar, book-keeper, is a native of Mount Pleasant, Penn., born December 8, 1841, to Henry and Catherine (Lichty) Eichar. He is one of a numerous family and is of German descent.

He remained in his native township until 1861, when he enlisted in Company B, Twenty-eighth Pennsylvania Volunteers, 28th Regiment, for three years. He participated in the battles of Antietam, South Mountain, Boliver Heights and many other minor engagements. He was honorably discharged in 1864, and the following year came to York, where he has since lived.

Soon after his removal to York he accepted a position in the employ of A. B. Farquhar, and here continues. He is one of the most competent and exact accountants in York, and enjoys the supreme confidence of his employers. He was married in 1864 to Miss Eliza B. Welty, who bore him six children. Mrs. Eichar died in 1879, and the following year Mr. Eichar was united in marriage to Miss Maria C. Buckingham, a native of York County. One child has been born to this union. Mr. Eichar is a member of the Republican party. In 1878 he was elected assessor of the Second Ward. He is a member of the G. A. R., Sedgewick Post, No. 37. Mr. and Mrs. Eichar are members of the Methodist Episcopal Church.”

Captain Eichar died on April 12, 1913, and is buried in York’s Prospect Hill Cemetery. He had six children by his two wives. 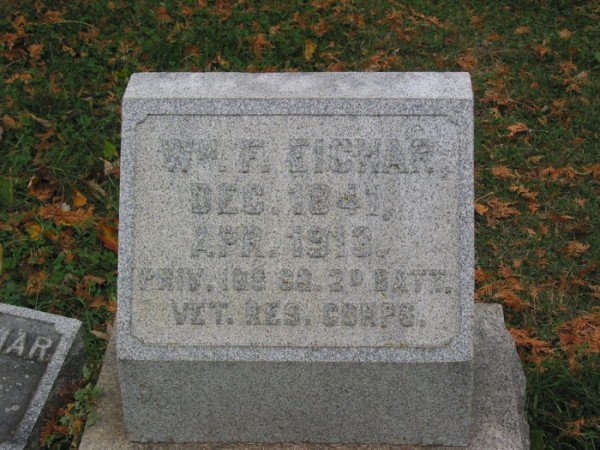