“Wounded Houses, Shattered Lives” at Gettysburg is topic of York CWRT on August 16 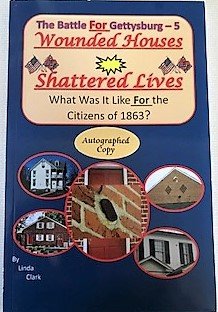 Press Release from Kathy Friel of the York Civil War Round Table:

On August 16, 2017, please join the York Civil War Round Table in its 20th Anniversary Year, welcoming author Linda Clark to our meeting for her PowerPoint presentation based on her book “Wounded Houses, Shattered Lives: What Was it Like For the Citizens of 1863?”  The monthly meeting is at 7 p.m. at the Historical Society Museum, Library and Archives, 250 E. Market Street in downtown York, PA. Admission and parking are both free, and the meeting is open to the public.

Linda Clark will speak on Gettysburg buildings that still exhibit battle damage and the inspiring stories of the resilient citizens who survived the horrors of battle.

The book truly connects the actual residents of Gettysburg with the surrounding military action of July 1863. “Wounded Houses, Shattered Lives” features many original buildings, including ten that still carry the scars of war in the form of protruding cannon shells or holes created by cannon balls. Photographs of people and places illustrate the narrative that is based on extensive research, including first-hand accounts and newspaper articles. Some of the actual citizens include Jennie Wade (whose story is quite famous), Elizabeth Thorn, Amelia Harmon, Edward McPherson, David Wills and Nicholas Codori. Buildings featured include the Tyson Brothers Photography Studio, the Eyster Female Seminary, Oak Ridge Seminary, and the Trostle Barn. If the walls of these buildings could talk, they could share the pain and suffering of a summer when wounded soldiers sought refuge within these dwellings.

Travel back in time 154 years to meet some of the citizens who experienced the battle, as well as the aftermath. May these heroic stories of people from the past serve to inspire people of the present.

For nearly four decades Linda Clark has enjoyed seasonal employment as a Licensed Battlefield Guide at Gettysburg National Military Park. During much of that time she had the pleasure of serving as an elementary library teacher in the South Western School District in York County. Upon retirement, Linda combined these experiences by writing her first book, a historical fiction story entitled “Star Light, Star Bright: A Tale of Old Gettysburg.” Then, using first-hand accounts from the local Adams County Historical Society, Linda wrote the nonfiction book entitled “The Battle For Gettysburg: What Was It Like For the Citizens of 1863?” She soon realized that many amazing stories of actual heroic citizens of Gettysburg were waiting to be told.

The title of that first nonfiction book became the name of a series that currently numbers six books. Each volume features at least 30 Gettysburg civilians as well as locator maps and photographs. She hopes to continue to give a voice to those often-forgotten citizens who persevered the unimaginable struggles of the summer of 1863.

A native of Gettysburg, Linda and her husband David, live near the battlefield on Herr’s Ridge where they enjoy the sun setting over the Blue Ridge Mountains.