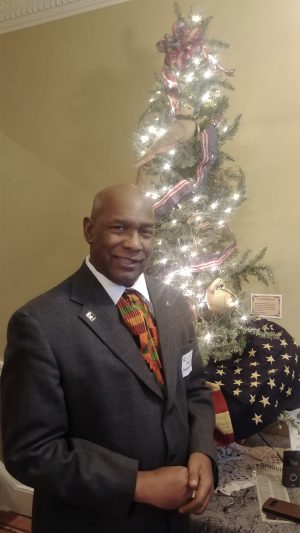 Press release from the York CWRT: Living history interpreter Kelly D. Summerford will appear at the February 20, 2019, monthly meeting of the York Civil War Round Table in York, Pennsylvania. The talented actor and public speaker will be portraying William C. Goodridge who was a prominent York businessman, abolitionist and conductor on the Underground Railroad.

The first-person presentation is free to the public and everyone is welcome. The meeting will be on Wednesday, February 20 at 7:00 p.m. in the auditorium of the Historical Society Museum of the York County History Center, 250 E. Market Street, York, Pennsylvania. In case of inclement weather, call the History Center for information at 717-848-1587.

William C. Goodridge (1805-1873) was born into slavery in Maryland. His mother conceived William on a plantation in Carroll County. At age 6 William was sent to York, Pennsylvania, across the Mason-Dixon Line to be an apprentice to a tanner. He learned the trade so well he was freed at the age of 16 with a Bible and a new set of clothes. He left York briefly and returned to open a one-chair barbershop on Centre Square at age 21. He was a talented barber and soon his small business became a large emporium. William owned a rail line with 13 cars that went to Philadelphia every day. He also was a station master on the Underground Railroad, connecting escaping freedom seekers to places of safety.

Kelly D. Summerford is the manager of the Goodridge Freedom Center and Underground Railroad Museum located at 123 Philadelphia Street, York, Pennsylvania. He is an actor, director, producer and living history interpreter. A Harrisburg native, he served four years as a Harrisburg city councilman. Summerford worked 11 years for the Pennsylvania Child and Adolescent Service System Program Training and Technical Assistance Institute, as liaison to the Department of Psychology at Penn State University. He served 12 years as a per-capita computer programmer for the Pennsylvania AFL-CIO.

He always had a passion for the Arts and started his theater career as a professional dancer in the “Genie and the Magic Carpet Ride” as the original Aladdin. He toured the country performing in children’s theater productions. Summerford trained at H.B. Studios in New York City and worked on many feature films and numerous nationally-broadcast television commercials. He has directed the Martin Luther King, Jr. Performing Artists Showcase for 15 years.

Kelly is currently a member of the Harrisburg Civil Service Commission for Police and Fire and board member of Historic Harrisburg. He is a 40-year member of the Screen Actors Guild and served on the nominating committee for the “SAG Awards,” an active member of The American Federation of Television and Radio Artists, Black Filmmakers Foundation and the American Film Institute. He is the founder of Kreative Lines, LLC, Central Pennsylvania’s Film Affiliate and the publisher of “Showcase Now!” Magazine.