Who was eastern York County’s Unknown Confederate Soldier buried along the Susquehanna River? 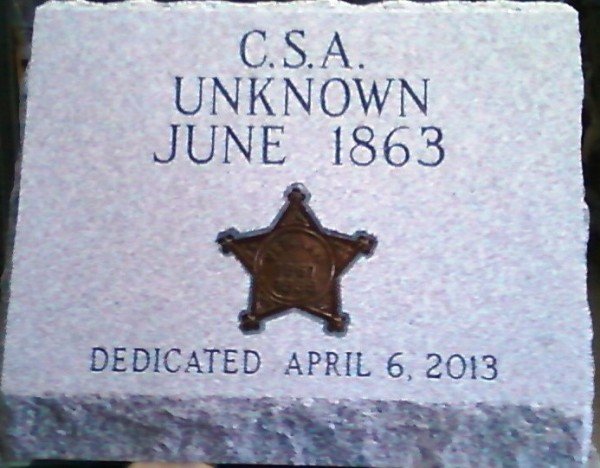 Recently the biggest Civil War story in York County, Pa., has been the dedication of a new gravestone for an Unknown Confederate Soldier who died in late June 1863 during the Gettysburg Campaign. His body washed up in rural Hellam Township along the western bank of the Susquehanna River near Buzzard’s Roost (a low mountain) and was buried by the locals. This was on modern River Road about a mile north of the Accomac Inn (then known as the tavern at Glatz’s Ferry). The site is at a narrow sandbar created by runoff from nearby Dugan Run.

Accounts indicated the corpse was a Confederate cavalryman, based supposedly on his dress, accoutrements, and boots. His grave and the nearby road washed away in 1972 during Hurricane Agnes; a replacement stone was lost in 2011 as a result of the twin storms, Hurricane Irene and Tropical Storm Lee.

Over the years, stories have circulated that the dead Southerner was a deserter who drowned while trying to cross the river (either on a raft/boat or on a horse). Back in those days the Susquehanna was treacherous, with very swift currents, large rocks, and an uneven riverbed rife with unseen holes. Other accounts suggest the man was a scout looking for a ford and again, the perils of the rain-swollen river caused his untimely demise. A scattering of reports suggest the soldier was killed and either fell into the river or perhaps was thrown into it.

So who was he?

We don’t know for sure, but we can begin to narrow down the possibilities.

First, we know that four separate groups of cavalry operated in York County during the Gettysburg Campaign. The 16th Virginia Cavalry, from Brig. Gen. Albert G. Jenkins’ brigade, crossed into northwestern York County from the Mechanicsburg area on Saturday, June 27, 1863, and a patrol under Maj. James H. Nounnan trotted as far south as Dover. However, there are no indications that anyone deserted from this group, nor were any of their men reported killed in York County. Dillsburg and Dover both are a long way from where the body was discovered in extreme eastern Hellam Township, so let’s agree that this is a remote possibility and move on.

On June 30-July 1, more than 4,500 Confederate cavalrymen under famed Maj. Gen. J.E.B. Stuart marched from Hanover northward through Dover to Dillsburg before he continued on to Carlisle with most of his force. The same argument for distance from the dead body miles away at the river holds in this case, again unless the deceased was a deserter. It is known that some of Stuart’s men indeed straggled or deserted, so this must remain a possibility which can not be discounted. The First Troop, Philadelphia City Cavalry rounded up most of Stuart’s deserters, but perhaps one drowned while trying to cross the river, but no reliable records have been uncovered to support this theory.

Between Major Nounnan’s raid on Carroll, Warrington, and Dover townships for supplies and horses and General Stuart’s mistaken foray toward Carlisle, two other Confederate cavalry units were in York County. The pair accompanied Maj. Gen. Jubal A. Early’s infantry, which came in from the west from Adams County on parallel columns using Canal Road and the Gettysburg Turnpike (now US Route 30) before entering central York County.

The smaller of the two units, the 35th Battalion, Virginia Cavalry (Lt. Col. Elijah V. White commanding), remained in the southern and central part of the county, largely screening the movements of the Georgia brigade of Brig. Gen. John B. Gordon. This battalion sacked Hanover Junction, rode through downtown York on June 28, and then accompanied the Georgians to the Susquehanna River at Wrightsville. None of their men were reported as missing in York County or listed as deserters. Moreover, with the swift current, any attempt to cross the river near Wrightsville would have left the body well south of that town, not a few miles north of it.

So, let’s look to see if any bodies of Rebels are known to have been upriver toward Harrisburg, perhaps at Goldsboro or York Haven, logical places from where a dead person might float with the current to the bend north of Glatz’s Ferry.

And, yes, the 17th Virginia Cavalry fits this scenario.The regiment had been formed earlier in 1863 from scattered companies originally in a variety of other Confederate cavalry and infantry regiments. Several of these companies had largely acted as partisan rangers and scouts in the mountains of West Virginia for most of the war.

On Sunday, June 28, while at Weigelstown en route to York, General Early ordered Colonel William Henderson French to take the 17th Virginia Cavalry northeast toward the river to the York Haven area and burn two important railroad bridges on the Northern Central Railway spanning the Conewago Creek. Several written accounts, as well as documented damage claims from local farmers, confirm that French’s (West) Virginians successfully burned the bridges after skirmishing with and driving off the defenders, several companies of the 20th Pennsylvania Volunteer Militia, in a “sharp skirmish” opposite Bainbridge a few miles southeast of Harrisburg.

OK, so we now have a known CSA cavalry unit in the right location for a body to have washed downstream toward Glatz’s Ferry.

So, can we narrow it down some more? What do contemporary accounts say?

First, we have a letter from local farmer Moses Shelley, whose family lived on an island in the middle of the Susquehanna River. He verified that the Rebels “burnt the bridges” from York Haven to within 5 miles of Goldsboro.

In Bainbridge, tavern owner George Finlaw left us a much more detailed account of the skirmish between the 17th Virginia Cavalry and the untrained state militiamen as they retreated across the Susquehanna to Bainbridge:

“Soon as they showed a disposition to cross, the Soldiers were filed down from the town on the front and formed in line of battle, and this side of the river dotted with boats filled with sharp shooters pulling out to an Island to meet them. For a few minutes the popping of their rifles was quite brisk on both sides but the rebs saw we were likely to give them the worst of it and returned.”

OK, now we have Rebel riders in the river! Notice his phrase “commenced to ford the river” and the accounts of shooting. He was an eyewitness to the skirmish of York Haven/Bainbridge.

Accounts began to appear within two days in several period newspapers. Downriver from Bainbridge in Columbia, the Register (a weekly newspaper) on July 4 wrote that “Rebel scouts have been seen passing down the banks of the Susquehanna…” The Philadelphia Inquirer added, “A body of Rebel cavalry made an attempt to cross near Bainbridge. They ventured into the Susquehanna until their horses began to fail.” This corroborates innkeeper Finlaw’s account that the soldiers were trying to ford the river in pursuit of the militia. Another newspaper account included this clue, “400 rebel cavalry attempted to ford the Susquehanna, but were baffled by the current.” This is not too far from the actual strength of the 17th Virginia, which may have been close to 300 men.

OK, let’s recap… we have separate but corresponding accounts of Rebels riding their horses into the Susquehanna during or immediately after a sharp skirmish with Pennsylvania state militia in which rifles were popping. Oh, by the way, the 17th Virginia largely carried 3-band imported Enfield rifles, not pistols and sabres, and the defending militia infantry also had rifles.

We are getting closer. 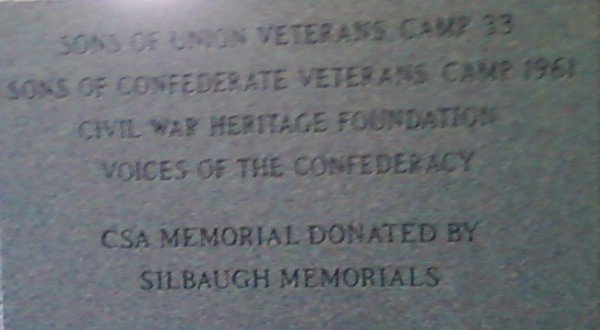 Several New York newspaper correspondents had traveled to Columbia to report on the defense of the river crossings. One wrote on June 30 “… a rebel scout shot while crossing the river.” The New York Herald added some details in its account from Columbia, “A rebel scout was shot a few miles above this place in attempting to cross the river in a boat.” Some confusion as to whether this man was on a horse or on a boat, but the key fact is that the two competing reporters agree about a Confederate casualty IN THE SUSQUEHANNA RIVER.

Now we have a cavalryman shot upriver from where the body was found. We appear to be getting very warm, and circumstantial evidence suggests this wounded or dead soldier may indeed be our Unknown Confederate Soldier whose short life is commemorated by the newly dedicated marble marker along River Road. Of all the possible scenarios, it seems that the most likely one is that our victim was a member of the 17th Virginia Cavalry, which was mostly recruited in what is now West Virginia, but a search through the casualties which had showed early promise turned out to be a false lead.

If any Cannonball reader can shed more light on the identity of the dead man memorialized along the Susquehanna River in Hellam Township, please contact me at scottmingus@yahoo.com.

By the way, I am still working on identifying two more unknown Civil War casualties here in York County, Pennsylvania — the murdered Union courier at Green Ridge and the black civilian defender of Wrightsville whose head was mangled by a Confederate artillery shell fragment.