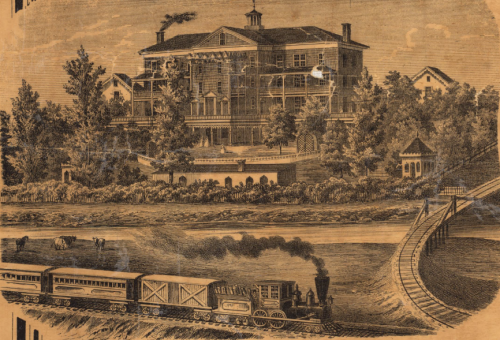 During the mid-19th century, Cottage Hill College was a prominent landmark on the northwestern side of York, Pennsylvania. Established by the Reverend John F. Hey in 1847, the finishing school was especially popular with out-of-town girls, including many from the South. The magnificent four-story building, situated on a hill overlooking Codorus Creek, enjoyed its own railroad siding. A spur from the main line of the Northern Central Railway brought students, family members, and guests north from Baltimore to the foot of the hill. A short walk brought them to the school’s impeccable grounds.

By the time of the Civil War, Cottage Hill College had new ownership in Dillsburg native George W. Heiges, the younger brother of the superintendent of York’s school system, Samuel B. Heiges. Here is an excerpt from the June 25, 1862, edition of the Lewistown (PA) Gazette. The editor (“W.”) and his companion[s) visited the facility while in York and left this marvelous contemporary account. They also had the chance to meet an itinerant peddler who left a lasting impression on them.

The other day I visited Cottage Hill College. This is a fine, large building, beautifully situated on the north bank of the Codorus creek, just opposite the town. It is now occupied by Profs. Heiges and Griffith as a Normal and Classical Institute. These enterprising gentlemen have already done much for the advancement of educational interests in this county. Their liberality in furnishing their school with every necessary convenience, their zeal in the cause in which they are engaged, and their eminently practical methods of instruction have won for them a high reputation and secured them an extensive patronage, although they have not yet completed their first session. I was highly pleased with my visit. It was quite a relief to get away from the hot and dusty streets and enjoy the cooling shade, the pleasant walks, and delightful breeze which seems to be always playing about “Cottage Hill.” On the one side of the building is a large and beautiful spring. A small water wheel and pump forces the water through pipes to the very top of the building, (an elevation of probably 100 feet,) from whence it is distributed to various apartments in the house, to fountains in the yards, etc. A number of “speckled beauties” have been placed in the spring, and we amused ourselves for some time in throwing them worms and watching them darting like eagles, and displaying an activity which would have caused the arm of a trout-fishing editor to feel rather nervous. After partaking of an excellent supper, we took a stroll in the garden and among the flowers. We wondered at the quantity of peas in the garden, but ceased to wonder when informed that, when the school is in operation, one bushel (shelled) make but a single mess. The grounds are adorned with a number of shade trees and a great many varieties of beautiful flowers, specimens I received in the shape of a handsome boquet. Before leaving, we were entertained with a harangue from a natural orator in the person of a jolly, round faced old man, who came into the yard to exhibit some specimens of soap, receipts [recipes] for making which he wished to sell. He proclaimed himself a “Hinglishman,” but protested strongly in favor of American institutions and American genius, especially that of Ben Franklin. He thought the thunder and lightning would still be running wild, had it not been for Ben. — Ben was his model. Ben labored for the good of the people by promulgating principles of economy and truth, and so did he — by selling them receipts to make good soap. This traveling Demosthenes professed to be a worn out tallow chandler, but I strongly suspect he was a traveling jour printer. Prof. H. bought one of his receipts, gave him a bite to eat, and he went on his way rejoicing. W.

Blogger’s note: Cottage Hill College closed in 1865 and G. W. Heiges became a lawyer and later a prominent politician. The school later reopened under new leadership. It was razed early in the 20th century. Its approximate location was 325 Cottage Hill Road.