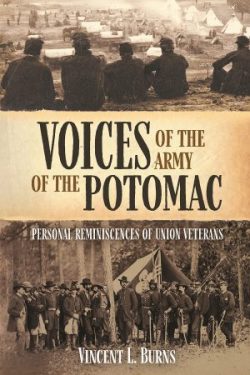 New book: Voices of the Army of the Potomac

My great-grandmother, Mary Caroline Chambers Mingus, was a little girl living in Marshall County, [West] Virginia, during the Civil War. Several of her family members served in the 7th West Virginia infantry regiment in the Army of the Potomac. They fought in most of the army’s battles, including Antietam and Gettysburg. One of them died in the Overland Campaign of 1864. The rest came home to tell their stories of life as a soldier.

Author Vincent L. Burns has studied many other accounts from the men who served in the Union’s best-known army. He includes hundreds of snippets from these letters, journals, diaries, etc. in an interesting new book, Voices of the Army of the Potomac: Personal Reminiscences of Union Veterans. The Idaho resident had previously written a book on the 5th New York Cavalry. He holds a master’s degree in American History from the University of Memphis and is a talented writer.

Burns skillfully interweaves these personal accounts into the larger framework of the formation of the Army of the Potomac, its marches and campaigns, failures and successes, through the disbanding of the celebrated army at the end of the war. The old veterans that he cites represent a wide spectrum of different regiments, brigades, and corps within the Army of the Potomac. Their diverse postwar recollections add color and perspective to Burns’ narrative. We today can only read about what happened more than 15 decades ago; these soldiers lived the experience and wrote about it. The author has mined thousands of these written memories to use the ones that best fit the story of an army that suffered defeat after defeat in the early years of the war only to emerge triumphant in the end. They endured a series of poor commanders before time, enemy attrition, overwhelming logistical superiority, and a determination to see the war through finally led to Ulysses S. Grant’s meeting with Robert E. Lee at Appomattox Courthouse in April 1865.

The soldiers’ voices reflect their worries, concerns, joys, anguish, and other emotions as the war progresses. For example, reflecting on the army’s inability to annihilate the Confederates at Gettysburg, a member of the 13th Massachusetts penned, “There must be more slaughter, as if the gods were not appeased.” He regretted that they did not follow-up after Pickett’s Charge with a counterattack. Other men left their impressions of the Black troops that joined the war effort in 1864. Still others commented about their enemy’s abilities and causes why they fought. Some men faced death with bravery; others worried they would never come home. Burns effectively uses the words of army commanders, key generals, field and line officers, and, best of all, the common enlisted men who did the bulk of the fighting.

His table of contents reflects the wide scope of this book:

Chapter 1 Remembrance as History
Chapter 2 From Reunion to Revolution
Chapter 3 An Incident on the Road to Spotsylvania Court House
Chapter 4 One Vast Field of Intense, Earnest Action
Chapter 5 If There is No Objection – None in the World
Chapter 6 Skirmishers Three Deep
Chapter 7 Maybe This Time
Chapter 8 Pursuit to the Potomac
Chapter 9 Return to the Rappahannock
Chapter 10 Again, the Wilderness
Chapter 11 Spotsylvania, Cold Harbor and Across the James
Chapter 12 Petersburg
Chapter 13 Closing Out the War

All told, this book is a worthy addition to the historiography of the Union Army of the Potomac.