Virginia’s waterways were paths to freedom for escaped slaves 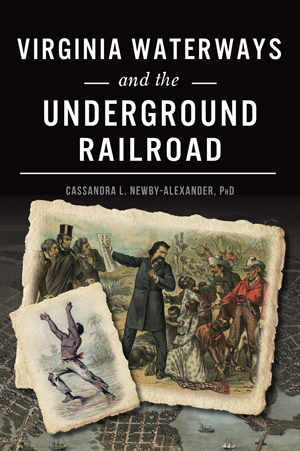 South-central Pennsylvania, including York and Adams counties, were often the first place that escaped slaves from Maryland and Virginia headed in their quest for freedom. Several books, including those by Cooper Wingert and David G. Smith, cover the topic across the entire region. Scott Mingus wrote a detailed book specifically on the Underground Railroad in York County, while Matthew Pinkster and others have looked at the Keystone State in total.

A good number of freedom seekers that entered Pennsylvania originated from Virginia. For many of them, the Old Dominion’s myriad of rivers, creeks, and bays provided geographic guidance, as well as a direct pathway away from the plantations and places of industry where slaves were employed. Many of those watercourses drained into the Atlantic Ocean, making the coastal areas a specific target for freedom seekers and slave hunters alike.

The author, Dr. Cassandra L. Newby-Alexander, is a professor of history and the director of the Joseph Jenkins Roberts Centers for the African Diaspora at Norfolk State University. Her previous works include treatises on the African-American history of the Hampton Roads area. She has been a leader in the chronicling of the early days of slavery in Virginia, beginning with the first captives arriving at the Jamestown colony in 1619 and continuing with the spread of slavery inland to the point where it became a dominant economic force within the commonwealth.

In her new book, she discussed some of the earliest known escape attempts of slaves desperate to flee from their masters in search of a better life. Often, they followed local waterways, continuing on to larger and larger bodies until they could find passage to the North or could find a friendly place to hide. Over time, the Norfolk-Hampton area became one of the leading targets for 18th- and 19th-century freedom seekers, where a loose network of sympathetic boatmen could assist them as the Underground Railroad began developing in the region.

Dr. Newby-Alexander deftly recounts the stories of several of these freedom seekers, including some the more famous such as Henry “Box” Brown and Shadrack Minkins, both of whom later became voices for the abolition movement. Brown received his nickname for his daring idea to mail himself in a wooden crate from Richmond to a known Underground Railroad stationmaster, William Still, in Philadelphia. In addition to the well-known examples of freedom seekers, the author also introduces several more obscure fugitives who used the waterways, at times creatively, as paths to freedom.

Using a slew of primary sources, including Still’s classic book that details scores of freedom seekers that arrived in Philadelphia, Dr. Newby-Alexander sheds light on the secretive work of the illegal Underground Railroad network and the freedom seekers who accepted their assistance. Boatmen such as John Minkins, a free black steward on a commercial passenger ship that plied the Norfolk-Philadelphia route, routinely helped escaped slaves hide on board boats for the trip northward. The trick was to make it to the docks undetected, as bounty hunters abounded, hoping to cash in on rewards offered for the successful capture of escaped slaves. Whites and free blacks alike at times rendered such assistance.

This book is a compelling, well-written account that is authoritative and engrossing, as well as a much needed compilation on the inner workings of the Underground Railroad in coastal Virginia. It deserves a place on the bookshelves of anyone interested in the Underground Railroad, black history, or antebellum Virginia. Dr. Newby-Alexander is to be commended for a fine book that is the definitive work on the topic.

For more information or to place an order for the book, please visit the publisher’s website.