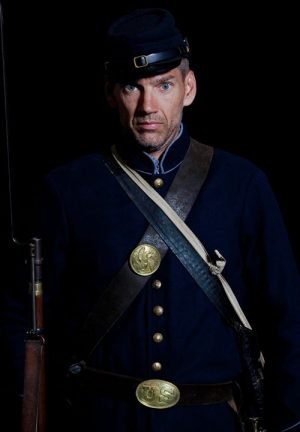 Press Release, York CWRT: On May 15, 2019, please join the York Civil War Round Table as they welcome Kevin Shroyer as their featured guest speaker. Mr. Shroyer will present a PowerPoint program titled “Virginians in Blue.”

The monthly meeting is at 7 p.m. at the Historical Society Museum of the York County History Center, 250 E. Market Street in downtown York, PA.  Admission and parking are both free, and the meeting is open to the public. Bring a friend!

“Virginians in Blue” is a program that Kevin was asked to put together initially for the American Civil War Museum in Virginia. After extensive research, he has compiled a list of native-born Virginians, 22 in all thus far, who sided with the Union at the outbreak of the Civil War who ultimately rose to the rank of General. Some will be familiar names such as Winfield Scott, George Thomas, and John Newton, while others not so familiar, such as James Denver, Jacob Ammen, and William Ward. Many, such as Thomas, have interesting stories to tell which Kevin presents with numerous slides (77) and dialogue interjected with humor along the way. With several more recent additions, the program stretches out to slightly beyond an hour but Kevin has been told that the time passes quickly because of his presentation style.

Kevin Shroyer is a native of York, Pennsylvania. He graduated from York College of Pennsylvania with a B.S. degree in Criminal Justice. Upon graduation, Kevin was offered a position with the Lynchburg, Virginia Police Department and worked there for over 15 years. He currently serves as the Investigator for the Lynchburg Public Defender Office, a position he has held for the past 21 years.

Kevin is President of the Lynchburg Civil War Round Table, a position he has held multiple times over the years. Kevin is a Founding Charter Member of the Taylor-Wilson Sons of the Union Veterans Camp #10 in Lynchburg, being a direct descendant of the prominent Meals family from Gettysburg. He is also the President of the 11th Virginia Volunteer Infantry Co. G “Lynchburg Home Guard” reenacting unit.

When not studying the Civil War, Kevin devotes much of his free time in his pursuit of fitness and running. He has coordinated and directed races in Lynchburg resulting in close to $100,000 being raised for charitable causes. He has run hundreds of races from 5ks to the marathon, having completed over 30 marathons, including the past four Boston Marathons. He is an outspoken proponent of organ donation which is the cause he supports through his running.

Upon retiring, Kevin would like to pursue his love of history and writing by authoring a book on the Civil War, most likely Gettysburg, because there can never be enough books about Gettysburg!