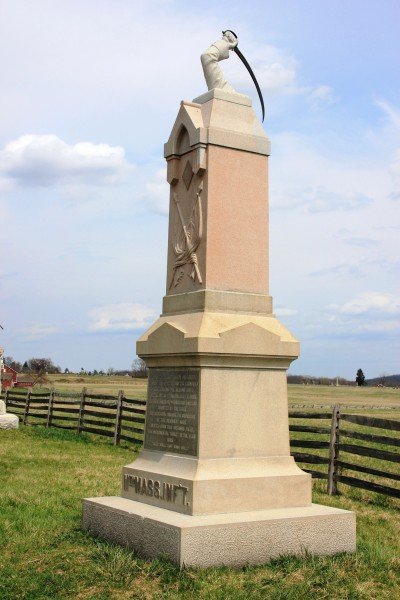 Gettysburg National Military Park monument preservation staff placed a new carved granite arm for the 11th Massachusetts Infantry onto its pedestal on the battlefield earlier today, April 11, 2013.  The work started at approximately 8 a.m. and was largely completed by late morning.

This was the final step required for full repairs to the monument that was vandalized in February of 2006.  The park received the new carved granite arm for the monument from Granite Industries of Vermont earlier this winter. Once the arm was placed on top of the pedestal, the staff attached the sword and hand guard.

In the winter of 2011/2012, using a large collection of photos to ensure the correct size and shape, park preservation worker Brian Griffin sculpted the arm out of clay, then made a mold and created a plaster model that was shipped to Vermont for replication in stone.

The 11th Massachusetts Infantry monument, the 4th New York Artillery (Smith’s Battery), and the 114th Pennsylvania Infantry were vandalized in February 2006.  The park has repaired both the 4th NY and the 114th Pa. monuments. Despite a $30,000 reward for information, no arrests or convictions for the vandalism have been made.