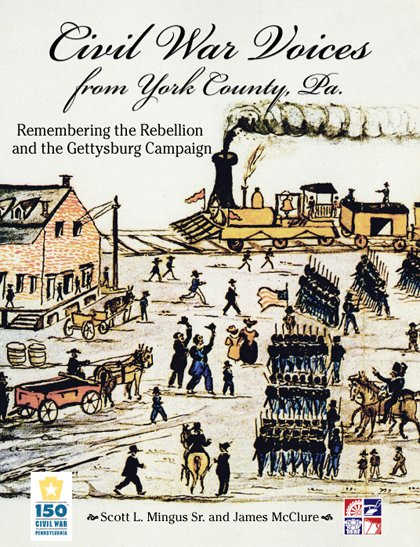 Jim McClure and I are co-writing what should be a very interesting and entertaining book entitled Civil War Voices from York County, Pa.: Remembering the Rebellion and the Gettysburg Campaign. The book is due out in April from Colecraft Books of Orrtanna, PA (owned and operated by long-time Gettysburg Licensed Battlefield Guide Phil Cole).

We have been collecting dozens of human interest stories, anecdotes, incidents, oral traditions, and similar accounts, both written and those memories handed down through the generations beginning with the eyewitnesses. Scores of York Countians have responded with some fascinating new material.

In addition, several folks have submitted previously unknown Civil War letters from soldiers in a wide spectrum of regiments and locations, ranging from a complete 1864 diary from a Yorker stationed in Fort Monroe, Virginia, to a letter from a Winterstown native serving in an Ohio regiment at the Battle of Honey Hill in South Carolina. Among the highlights is a diary from a soldier imprisoned at the infamous Andersonville prison camp in Georgia, including a description of the execution of six fellow Union soldiers for murder and thievery.

.
Here is a snippet from this upcoming book:
“Charles W. Kline, 15-year-old hired hand, worked on the farm of William Smyser at the Five-Mile House, west of York on the turnpike to Gettysburg. It was a good job for the youth, paying $36 a year.

On Sunday morning, June 28, word came that Confederate soldiers were moving toward York, confiscating horses along the way. Smyser asked young Kline to take his five horses to safety across the Susquehanna River. He strapped $650 in cash around the lad’s waist. Charlie hitched two of the horses to a farm wagon and tied the other three behind it. He loaded about 15 bags of corn and oats and headed toward Columbia. They arrived in the late afternoon, not realizing that a significant Confederate force was just behind them. They waited in line to cross the river on the old toll bridge and finally arrived at Chickies Rock in the early evening. Following the Battle of Gettysburg, Kline’s team pulled him back to West Manchester Township, and the youth returned the horses and money to his employer.

A year later, when he reached the age of 16, Charlie enlisted in the 200th Pennsylvania Infantry. He participated in the Siege of Petersburg and took part in the battles of Fort Steadman, Dutch Gap, and Butler’s Point. He would witness the surrender of Robert E. Lee’s Army of Northern Virginia at Appomattox Court House.”

There are more than a hundred similar stories and personal remembrances from soldiers and civilians in the upcoming book, covering a wide range of topics — railroad stories, descriptions of battles, soldiers’ camp life, life on the home front, views on slavery and emancipation, eyewitness opinions of Abraham Lincoln and U.S. Grant, reaction to the Lincoln Assassination, and so much more. Most of the information is brand new and has not previously been published.

Watch this blog, as well as Jim McClure’s Yorktown Square blog, for further updates. This book had been endorsed by the PA Civil War 150 committee and the York County Heritage Trust and the cover will carry their logos.