Several residents of Wrightsville, Pennsylvania, filed damage claims following the Civil War for the loss of their homes, businesses, and shops caused when the riverfront area caught fire from flaming embers from the burning of the covered bridge (it had been set on fire at army orders in order to deny the Rebels from crossing the Susquehanna River into Lancaster County). Despite the Confederate soldiers efforts on a bucket bridge, the easternmost part of Wrightsville was destroyed.

The citizens petitioned the Federal government for relief, but the Committee on War Claims denied the money.

Here is the ruling…

Mr. Bragg, from the Committee on War Claims, submitted the following

The petition sets forth:

The petitioners in 1863 were, residents of the borough of Wrightstown [sic, Wrightsville], in the State of Pennsylvania: that on the 28th day of June, 1863, the bridge across the Susquehanna, between the borough of Wrightstown and the borough of Columbia, in the county of Lancaster, in said State, was burned by the military order or authority of officers of the United States, emanating from Major-General D. N. Couch, commanding the Department of the Susquehanna; that the fire from the burning bridge was communicated to the private property there situate of your petitioners, which was also consumed, and thereby your petitioners suffered loss to a large amount in real estate, lumber, millinery and confectionery goods, hats, household and office furniture, cars, steam-engines, planing-machines, foundry apparatus, hollow ware, and other descriptions of property to them respectively belonging.

This petition is accompanied by schedules of the property destroyed, appraised, verified, and attested, amounting in the aggregate to $45,558,53.

It appears from the proof filed that General Couch had made preparations for the destruction of the bridge whenever the proximity of rebel troops made it necessary, to prevent crossing the river, and protecting thereby Pennsylvania from further incursions of the enemy, with all of its destructive consequence; that the bridge was not fired until the troops of the enemy occupied Wrightstown; and unless the bridge was destroyed the State of Pennsylvania lay open to incursions.

The claimants have filed briefs citing general maxims and decisions of courts touching the liability of private parties where damages have ensued from negligent acts of omission or commission.

While these briefs are creditable to the diligence and subtlety of the counsel who prepared them, they fail to satisfy this committee that they are at all applicable to the principles involved in this case. And while we may concede the correctness of the rule laid down upon the facts in each case, we must decline to admit that they govern the liability in this case.

The borough of Wrightstown was the theater of military operations; the enemy were in possession; the destruction of the bridge was the result of an overruling military necessity; the damage resulting from its destruction was an accident of war inevitably and unavoidably incidental to its operations. In each case there is no obligation to make recompense.

The city of Moscow was burned to stay the course of the invader, but history fails to show that any amends or compensation was ever sought or received by private individuals.

When a great fire is in progress private property may be destroyed to stay the ravages of fire without subjecting the authority doing it to responsibility in damages.

The whole subject is discussed and authorities cited at length in Bossell v. The Mayor, &c. (2 Denio, N. Y. Rep., 473); also in the courts of New Jersey (American Print Works r. Laurence, 3 Zabriskie, 591-615; and the same principle has been recognized and announced in Pennsylvania (Respublica v. Sparhawk, 1 Dallas, Pa., 362).

This principle is applicable where the injury is the direct, immediate, and expected result of the act, which is much stronger than the case at bar, where the damages are merely consequential, and too remote to create a cause of action were the controversy between individuals, and the great principle of “overruling necessity,” recognized both by the common law and international law, formed no factor in the problem. “Salus populi suprema lex.”

The hardship to the individual is grievous and heavy to be borne, but if the rule is to be established that the government is to make good all destruction of property and injury to life and health consequent upon war, we shall break down and destroy the government in our effort to care for the individual. Generosity is a rare virtue, but when its exercise must destroy the fountains from which supplies are asked, it is not only time to hesitate, but we must absolutely refuse to yield to appeals which would subordinate the judgment to the impulses of the heart

The committee recommend the prayer of the petitioners be denied, and that the memorial be laid upon the table.”

None of the residents of Wrightsville ever received a dime.

Nor did the owners of the bridge, the Columbia Bank.

Lancaster County congressman Joe Pitts has filed petitions in Congress to try to get recompense, but his efforts are largely symbolic as the government is not likely to ever pay for the bridge damage, especially after 150 years. 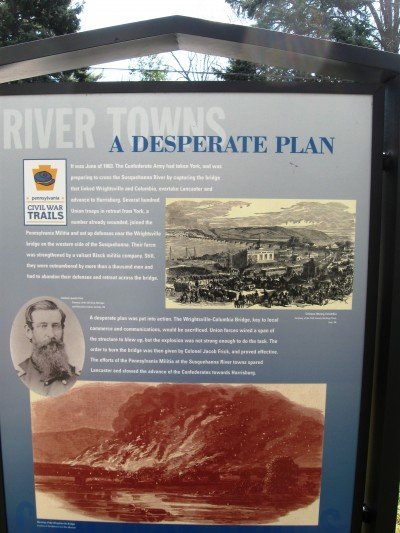