Mayer Foner for many years operated a popular wargaming and board gaming store in Lemoyne, Pennsylvania. That store has been closed for many years, but Mayer remains interested in the hobby. A few years ago he produced two board games intended to teach players the basic facts of the Underground Railroad movement in Pennsylvania. One game is a state-wide look; the other focuses on central Pennsylvania, including York County.

Both involve the players moving pawns representing fugitive slaves north toward Canada while avoiding being recaptured. Along the way, they learn about the history of the UGRR movement, including reputed stations and conductors, abolitionists, slave catchers, controversial laws such as the Fugitive Slave Act of 1850 and others.

Here are some photos of the game components, as well as Mayer’s commentary… 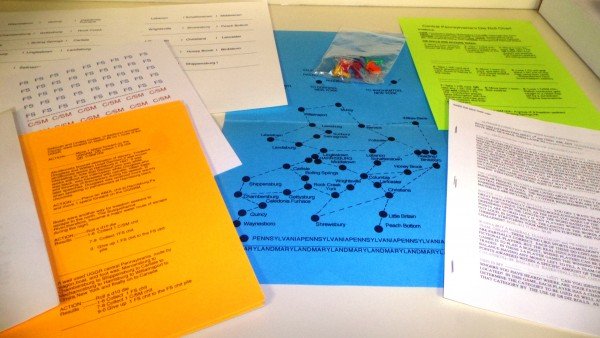 FOR EDUCATORS, PARENTS, CHILDREN, AND GAMERS:
1—CENTRAL PENNSYLVANIA UNDERGROUND RAILROAD GAME
Are you a survivor?  In this educational history game, you are a freedom seeker and have escaped into Central Pennsylvania in the mid-1800’s.  Some freedom seekers settled in Pennsylvania  and others moved on north to other states and Canada.  You must decide which route to take and see if you can eventually make it to north or Harrisburg or Reading or go on to New York or Canada.  Along the way, you will find friendly Underground Railroad stations/sites, conductors, station masters, abolitionists, and unfriendly slave catchers as you pass through Harrisburg or Reading, PA and points north.
When you have completed the 3 requirements as stated in the rules of the game, you win.  The game was copyrighted in 2005.
This game contains: d10 die, four colored pawns, map, rules, chips, town cards, die roll chart, teacher tips, ziplock bags and bibliography.  The game is designed for ages 9-100.  The playing time is 45 minutes to two hours.  The number of players is 3 or 4.
SUGGESTED RETAIL PRICE:  $13.75 + PA TAX

2—A GAME ABOUT THE PENNSYLVANIA UNDERGROUND RAILROAD—1820 TO 1870
Based on the above game this game adds another chapter to the ever growing body of information about the Pennsylvania Underground Railroad.  As in the above game, can any of the 1 to 4 freedom seekers make it to the New York state border first?
Along the way, each freedom seeker will encounter Underground Railroad sites/stations, counties, conductors, station masters,abolitionists, and unfriendly slave catchers and weather/terrain conditions.  This interactive game contains 35 turns which indicates the struggle of the long journey to freedom.
This game contains extensive historical information about the 66 Pennsylvania counties plus 115 selected Underground Railroad sites for teachers and parents.  The game describes the events, places, events, and struggles of these freedom seekers.  The game was copyrighted in 2008.
This game contains:  a d10 and a directional die, Pennsylvania county with site locations, history/event cards, teacher notes, bibliography, slave catcher, player, and turn pawns, county chits and cards, 11 other charts, ziplock bags, mini ruler, and station site listings.  You will need a die container and pencils.
This game is designed for ages 10 and up. Playing time is up to two hours.  Number of players is 3 or 4.  Versions:  There are two slightly different versions of the basic game that can be played and one advanced version of this game that can be played.
SUGGESTED RETAIL PRICE:  $ 23.75 + PA TAX
BOTH GAMES CAN BE PURCHASED FOR $33 + PA TAX  ($34.98)
IF INTERESTED  PLEASE E-MAIL MAYER AT: maygam1@verizon.net
Black history Civil War collectibles Underground Railroad