To Surrender York or Not? Part II 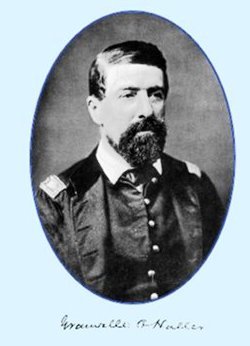 In my last post, I began a critical examination from a military perspective as to whether or not York should have been more strenuously defended. The first installment took a brief look at the 2,500 or so oncoming Confederates from Georgia, Virginia, and Maryland, who were, by the way, backed by three more entire brigades of infantry, three more artillery batteries, and a full regiment of mounted infantry from the mountains of West Virginia, all commanded by Jubal Early, known to Robert E. Lee as “my bad old man.” In all, some 5,500 veteran troops were approached York from Adams County.

And to stop them, the Federals had assembled a motley crew under a man recently risen from the sickbed, Major Granville Haller of the 7th U.S. Infantry…

The defenders:
* 20th Pennsylvania Militia: Scattered widely throughout York County, this militia regiment had all of three days of formal training before being transported by rail from Harrisburg to York County. They were primarily defending southern York County’s railroads and the Howard Tunnel. They had numbers, but zero combat ability. They would prove to be better runners than fighters.
* Patapsco Guards: A guard unit from Maryland that was the provost at the U.S. Army Hospital in York. There were less than 100 of them.
* York Invalids: A couple hundred of the patients at the U.S. Army Hospital took up arms and decided to try to defend York.
* A handful of men from the 87th Pennsylvania: Whipped and thoroughly beaten at Winchester, the regiment had essentially disintegrated in what was most assuredly not its finest moment. Elements had scattered to the winds, with some men returning home to Gettysburg and some back to York. They were trained soldiers, but too few in number to make any real difference.
* Some citizens with guns: A few Yorkers marched along with the Invalids, remnants of a home guard company. Despite the oft-repeated error that John Burns of Gettysburg was the only civilian to take up arms against the Rebels, there were dozens of other men who shouldered arms in various places and tried to fight the invaders.

That had been York’s entire defense force up until the evening of June 26th, when they were joined by what was left of the forces that had vainly tried (without any success) to put up armed resistance when Gordon and Early came calling on Gettysburg. They were whipped, in poor morale, and exhausted from racing across the countryside during the night. They were well away from York and still on the roads when York’s delegation rode out to negotiate with General Gordon, a skillful lawyer and shrewd businessman by trade.

5,500 of Lee’s finest troops coming fast, fresh off decisive victories over Haller’s forces at the skirmishes of Marsh Creek and Witmer Farm near Gettysburg – they were way too powerful to be stopped by York’s few defenders, even with Haller’s reinforcements fleeing from Gettysburg added to their ranks.

The decision not to fight? The only choice. The brief combat west and north of Gettysburg on June 26 had certainly demonstrated that Gordon and Early could not be stopped. The key was to avoid useless bloodshed that perhaps could have led to civilian injuries or property damage. It was a wise and prudent decision. It was the only rational decision. Haller pulled Gettysburg’s defenders and York’s motley crew of wounded hospital patients, scared militia, badly whipped Union veterans from the 87th PA, and the combat inexperienced Maryland guards back to Wrightsville.