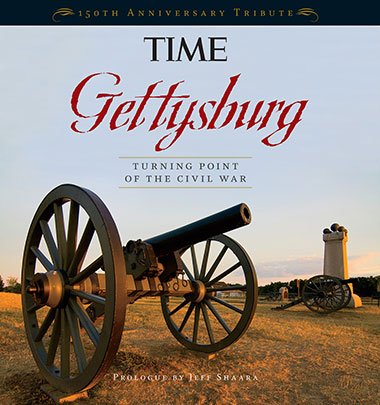 For most of the 20th century through the modern times, Time has documented the history of America as it happened, week by week and month by month. From the annual “Person of the Year” to the iconic images which have become part of American culture, Time has defined our generation and our parents’.

Now, the editors of Time (Kelly Knauer in particular) have stepped back a century and a half to chronicle the Battle of Gettysburg in a new book, Gettysburg: The Turning Point of the Civil War. Lavishly illustrated with concise and useful prose, this book is sure to be among the very best of the seemingly endless stream of new works to come out in 2013 during the 150th anniversary of the battle of Gettysburg.

Noted historian James M. McPherson wrote the prologue to the book, offering his insights as to why Gettysburg matters and exploring the legacy of the battle and its importance. He also examines the historical importance of Lincoln’s Gettysburg Address. Novelist Jeff Shaara wrote the prologue, giving a fictional, yet moving, account of a Confederate infantryman as he prepares to advance across the mile-wide fields on July 3 toward the awaiting distant Yankee guns, an assault later famed as “Pickett’s Charge.” 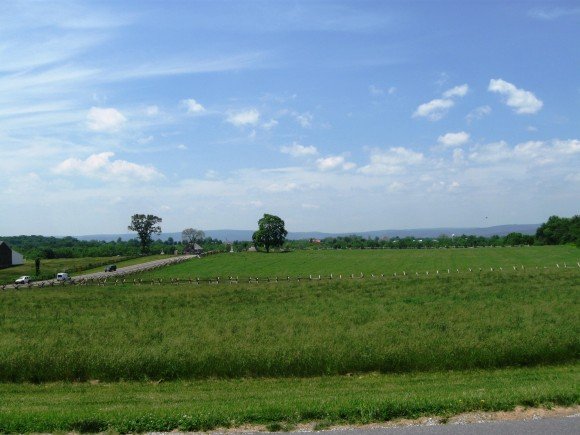 (Photo of a part of Gettysburg’s First Day field by Scott Mingus, May 2013)

Several useful maps by Time cartographer/artist Jackson Dyke and a slew of photographs selected by Deirde Read add visual appeal and depth to the new book.

Chapters are laid out in chronological order, beginning with a synopsis of the reasons for division of the Union and secession. Knauer and the Time team of experts sprinkle a series of profiles of key leaders throughout the book, beginning with Robert E. Lee and J.E.B. Stuart, interspersed with commentary on the early stages of the Gettysburg Campaign.

The section on July 1, 1863, begins with the opening combat and maneuvers, and includes a profile of George Gordon Meade. Time editor David von Drehle takes a look at the almost two years of frustration as President Abraham Lincoln and the U.S. War Department struggle to identify a suitable leader for the Army of the Potomac. A string of commanders, each with his own set of skills and a larger set of problems, have failed to prove themselves as effective matches for Confederate leader Robert E. Lee. Now, Lincoln has recently turned to Meade, a resident of Pennsylvania before the Civil War.

The July 2 section includes a profile of several key commanders, with a focus on Joshua L. Chamberlain (a popular topic in most modern books on Gettysburg), as well as a treatise on battlefield medicine at that point in history.

The July 3 section gives us a profile of James Longstreet and several lesser known leaders who played key roles in the day’s action, with an emphasis of course on Pickett’s Charge. A chapter in this section recounts the history of the Gettysburg Cyclorama, and an interesting essay by historian Drew Gilpin Faust and filmaker Ric Burns discusses the changes in military tactics brought about by the massive casualties incurred at Gettysburg.

This book is a very useful reference for those who may not be well versed in Gettysburg lore, and for the veteran battle buff offers some interesting material, especially the last section. Well written with an excellent selection of photographs and illustrations, the new book is a winner.

From the publisher: “To commemorate the 150th anniversary of Gettysburg this summer, TIME magazine and Time Home Entertainment will release Gettysburg: Turning Point of the Civil War (April 30), a beautifully illustrated, oversized hardcover book complete with fresh reports and insights on the epic three-day conflict along with an impressive collection of battle photographs.

Gettysburg is known as the largest and most important battle of the Civil War and one of the landmark events in American history in that its outcome ensured the survival of the U.S. as one nation.