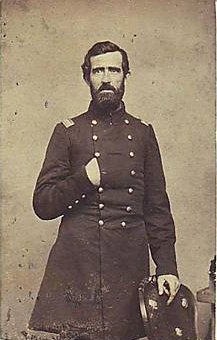 Rick Wiggin is a descendant of Union general Thomas Welsh, who led a brigade at Antietam and later fought in the Vicksburg Campaign under U.S. Grant. For several years, Wiggin has organized a symposium based on the Welsh’s life in the general’s hometown of Columbia, Pa. This year marks the 7th Annual Thomas Welsh Symposium, and it will be held on October 19, 2013, beginning at 1:00 p.m. at the Columbia Historic Preservation Society. CHPS co-sponsors the event along with the Columbia Public Library. Admission is free and the public is welcome.

Here is a schedule of speakers and topics:

Glory and Honor in the Columbia Region:
Col. Thomas Welsh in the War of the Rebellion
Columbia Historic Preservation Society
October 19, 2013
1:00 PM

“A Visit from Capt. Henry Haines of Maytown, formerly of Co. B, 45th Pennsylvania Regiment,” portrayed by Glenn Bachert

Capt. Henry Haines, of Maytown, served in three different units during the Civil War, including 18 months as captain of Co. B, 45th Penna Regiment, under Col. Thomas Welsh. After re-enlisting in the 184th Penna Regiment, he was captured in the Petersburg/Cold Harbor area in 1864, and held in a Confederate prison camp for 11 months. Columbia’s own Glenn Bachert brings him to life again, detailing the personal saga of this local Civil War veteran and prominent resident.

Despite the romantic image of the gallant Union officer leading his troops into battle, most of an officer’s time was spent in more mundane but equally important pursuits: recruiting, training, letter writing, dealing with the politics of military command, and reinforcing popular support for the war effort. Emanuel Roath of Marietta served as captain of the 107th Penna Regiment, in a career that had many parallels with Columbia’s Thomas Welsh. John Mulcahy, editor of Roath’s wartime journal, will explain the activities of a Union officer during the 97-99% of the time he was not leading his troops in actual combat.

“Human Contraband and Military Operations: Col. Thomas Welsh and Federal Troops in the Sea Islands,” by Mike Coker, author of The Battle of Port Royal

Following the Battle of Port Royal, in November 1861, Federal troops were confronted with ten thousand hastily-abandoned plantation slaves and a developing humanitarian crisis. Without established policy guidelines, the Northerners improvised—resettling them, building huts, putting some to work, and otherwise trying to prevent the distraction from interfering with their military objectives. Mike Coker, author of The Battle of Port Royal, will tell the little known story of the experiences of Col. Welsh and his local boys in South Carolina, amidst an evolving Federal policy and a grand social experiment over how to deal with these “contrabands” of war.

“The Maryland Campaign as a Proving Ground: Col. Thomas Welsh’s Rising Star,” by Tim Ware, author of the blog “Bloody Prelude: The Battle of South Mountain”

When Confederate General Robert E. Lee moved his army into Maryland in 1862, he unleashed a massive Union response that revealed many strengths and failures of the Union command. The Maryland campaign, as it came to be known, demonstrated the gallantry of the men of the 45th Penna Regiment, and served as a proving ground for Col. Welsh’s leadership. Blogger, historian Tim Ware (“Bloody Prelude: The Battle of South Mountain”) will walk us through the Maryland Campaign as it unfolded, and parse Welsh’s leadership qualities, through which he earned his promotion to brigadier general.