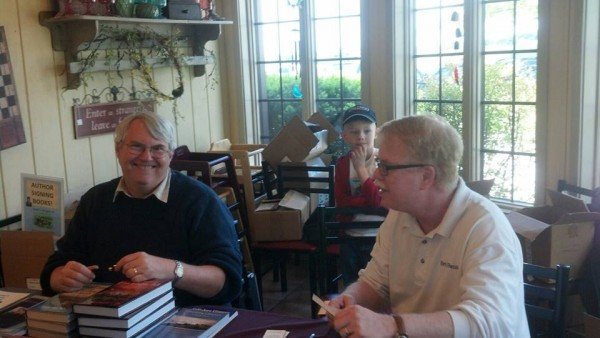 The York Civil War Round Table proudly presents historians and authors Scott Mingus, Sr. and Jim McClure speaking on their new book, “Echoing Still: More Civil War Voices from York County, Pa.” at their monthly meeting on Wednesday, June 26, 2013, at 7 p.m. Mingus and McClure, both history bloggers for the York Daily Record, will present a PowerPoint talk about their book which includes more than 200 fresh stories from the Civil War years from soldiers and civilians from York County or from men and women who visited York County during the conflict. Also included are dozens of never-before published photographs of local soldiers.

The meeting will be held in the auditorium of the Historical Society Museum at York County Heritage Trust, 250 E. Market St., York, PA. The meeting is free and open to the public. Doors open at 6:30 p.m.  and Jim and Scott will be present to sell and sign copies of their books. No reservations are required. Parking is also free. Light refreshments and door prizes will follow the presentation.

York County, resting on the Mason-Dixon Line 30 miles east of Gettysburg, stood in the line of fire in the Civil War. The numbers help tell the story: about 5,000 men served in the Union Army and about 4,000 vets are buried in county cemeteries. The casualties of those with county ties mounted as the war plodded on: 375 captured, 700 wounded and more than 600 dead. Indeed, York countians marched to war by the scores, and the unrelenting enemy tramped across county soil. In Echoing Still: More Civil War Voices from York County, Pa., Scott L. Mingus Sr. and James McClure follow their best-selling volume in this Voices series. They again use oral histories, letters, and newspaper accounts to tell the rich stories about York County and its residents in those terrible days of the Civil War, 150 years ago.

Scott L. Mingus, Sr. has written Flames Beyond Gettysburg: The Confederate Expedition to the Susquehanna River, June 1863 (a finalist for the 2011 Army Historical Foundation’s Distinguished Writing Award, for reprint), The Louisiana Tigers in the Gettysburg Campaign, eight other Civil War books, and numerous magazine articles. He is a sanctioned Civil War tour guide for the York County Heritage Trust and writes the Cannonball Civil War blog for the York Daily Record/Sunday News. He is a scientist and executive in the global paper and printing industry and is a graduate of Miami University in Oxford, Ohio.

James McClure is the author of East of Gettysburg: A Gray Shadow Crosses York County, Pa., Almost Forgotten: A Glimpse at Black History in York County, Pa., and three other books on York County history. He earned a master’s degree in American Studies at Penn State Harrisburg and is editor of the York Daily Record/Sunday News and the East Region, Digital First Media. He posts daily on his history blog, www.yorktownsquare.com.

McClure and Mingus collaborated on Civil War Voices from York County, Pa.: Remembering the Rebellion and the Gettysburg Campaign.

Please join the roundtable as it commemorates the 150th Anniversary of the Civil War! Light refreshments and door prizes follow the program. Bring a friend!