The telegraph comes to Hanover, Pa. 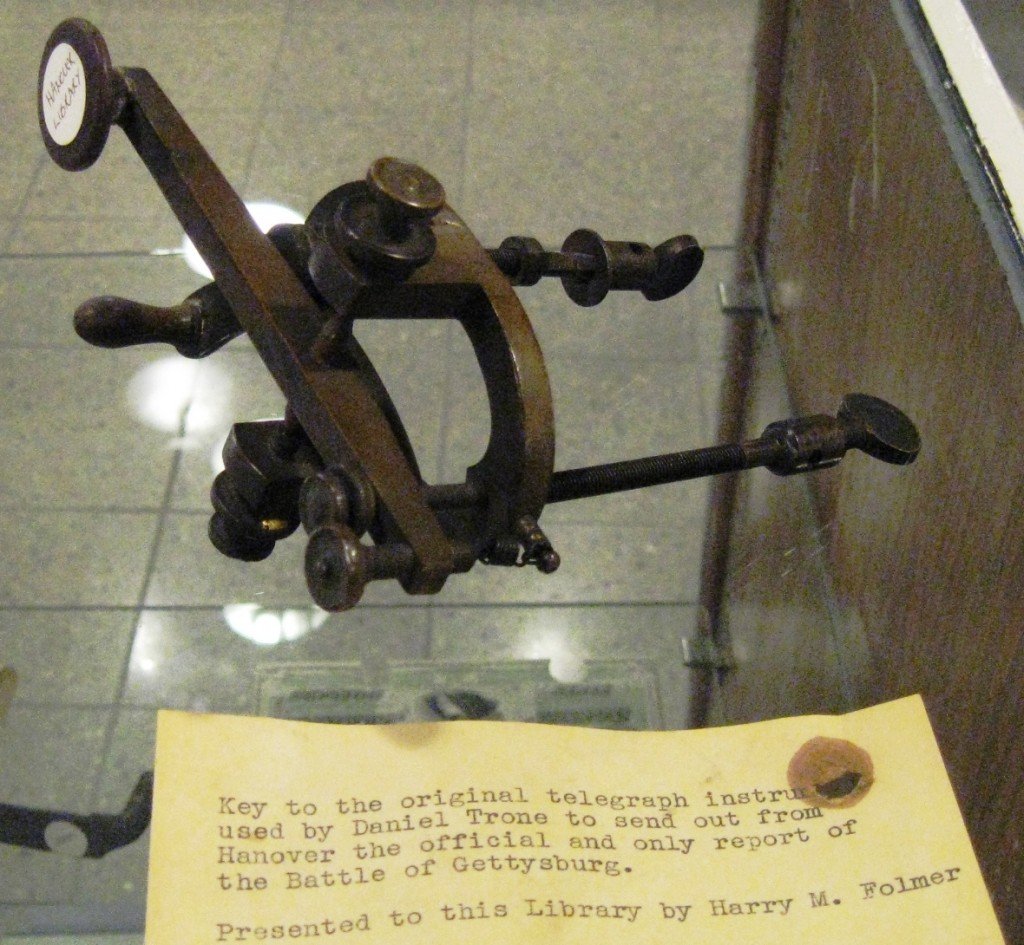 Gettysburg Licensed Battlefield Guide Bobby Housch maintains a very popular blog entitled Gettysburg Daily. He teaches school in Hanover, Pennsylvania, where the above photograph was taken at the Pennsylvania Room of the local library. It was first published on Bobby’s blog on August 1. The photo shows the key to the original telegraph instrument used by Hanover resident Daniel Trone to send the first report of the Battle of Gettysburg to the outside world. Newspaper correspondent Homer Byington wrote the message and Trone tapped it out and sent it to New York City.

The first telegraph in Hanover became operational in early 1860. The Hanover Spectator of April 13, 1860, headlined “The Completion of the Telegraph.”

“We are at length enabled to congratulate our citizens upon the completion of their line of Telegraph, in which we all have taken so deep an interest. The work, including the fixing of instruments, battery, &c., was finished on Tuesday, and in the evening of that day the first dispatch was transmitted from the Junction, and received with genuine gratification by the expectant crowd of citizens assembled at our Station. The dispatch was as follows:”

To the President, Directors and Secretary of the Hanover Telegraphic Company:

Gentlemen — Allow me to congratulate you on the completion of your Telegraph line, and its successful operation. Next to your Railroad, the Telegraph bids fair to become an Institution in your beautiful town, and I hoped, that as the Iron horse stands first with the commercial interests of Hanover, the Telegraph will rank next. With great respect, Gentlemen,

The following was sent in reply:

Office of the Hanover Telegraph Co.

Sir: — Your dispatch has been received. In reply, permit me to tender you the compliments of the Telegraph Board, and congratulate you in the successful working of the line.

The third dispatch ran as follows:

The following pleasantry was received on Wednesday:

Dear sir: — The Codorus is rising rapidly this morning; large numbers of rafts navigate the stream. The grain looks remarkably well after the late heavy rains. We have every appearance of another heavy rain here to-day. Business is very dull at the Junction. More again./cannonball/wp-admin/post-new.php

This concludes the original newspaper article from the Hanover Spectator. I heartily thank Cannonball reader and history buff Ray Kinard for sending me the above transcript.

Simon Cameron Wilson went on to a long career with the Northern Central Railway. He is mentioned in a November 1884 magazine,  The Electrician and Electrical Engineer, as being the leading telegrapher on the NCR’s line, in the same quality as his counterpart A. R. Keifer of the Pennsylvania Railroad. Wilson was division operation for a short time after the war and served the NCR later as a dispatcher and the superintendent of the Baltimore division at Harrisburg. He retired in 1877.

Here is the information provided by Ray regarding Wilson’s obituary.

Simon Cameron Wilson, Mayor of Harrisburg, Pa. who died recently was a telegraph operator in his youth. When the war broke out he was promoted to the superintendency of the Northern Central Railroad telegraph system, but he was employed often in more important work, such as the prompt shipping of supplies to the armies, the rapid transportation of troops in emergencies when there was danger at the front; and so well did he do his work that he was frequently complimented by the war department.

His great service was during the battle of Gettysburg. The union army was lost to the authorities at Washington who could get no communication with Gen. Meade. Young Wilson, with a pocket telegraph instrument and a supply of fine wire set off for Hanover Junction, where he found the wires all down. He connected his wire to the Northern Central line, and then set out for Gettysburg, using fence posts for telegraph poles, and following the railroad as close as he could. Several times he was chased by Confederate cavalry and he made very narrow escapes, but he finally reached Gettysburg, where he sought Gen. Meade and told him he had a line to Washington. Meade kept him at headquarters sending messages to Washington until the battle was over.