In part 1 of this 2-part series, W. H. F. Payne, a former Civil War general who had served in the Gettysburg Campaign as the lieutenant colonel of the 2nd North Carolina Cavalry under J.E.B. Stuart, shared his memories of stumbling and falling into an open wooden vat of tan bark during the June 30, 1863, battle of Hanover. A nearby Union soldier helped fish him out of the trough, and the two of them entered one of the Winebrenner Tannery’s sheds for cover as the battle continued to rage along Frederick Street.

Payne continued his vivid reminiscences of the fighting at Hanover in the May 10, 1901, issue of the York Daily, as told to York historian/correspondent George R. Prowell.

The Federal soldier had been slightly wounded. After a lull in the fighting I said to him, “Yank, you are my prisoner. We are going to win this fight, for all of Stuart’s cavalry is here.”

“All right, colonel,” he said, “if I rub off the tan bark juice from your clothes you will see that I soon get paroled, won’t you.”

“Yes, I will take care of you, sergeant,” I said, when I noticed the chevrons on his coat.

As an hour or more passed by, we heard no clatter of horse’s feet. The guns had all been silenced and we came to the conclusion that the battle was over. I felt sure that our side had won the contest. Then I said, “Now, Yank, we’ll go into town and see how things have gone.”

“Don’t forget Colonel, I am soon to be paroled again,” remarked my companion. We had gone but a few yards when a sentinel came riding up to me.

“Surrender,” he shouted as he brandished his saber.

“What in the thunder is up now?” Didn’t Stuart win this fight?”

“Kilpatrick and his forces are in possession of this town,” answered the sentinel.

“Then sergeant, I reckon I am your prisoner,” I said as I turned around to look my comrade in the face. “There is no parole for you ahead, but when shall I be paroled?” 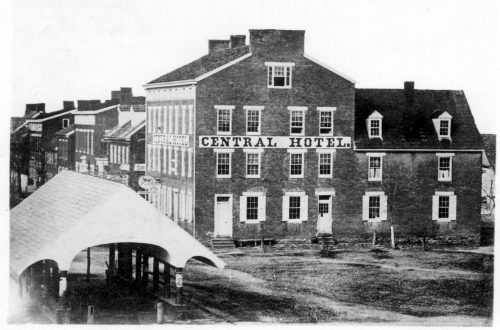 As we turned the corner at Centre Square, one of the first persons I saw was General Kilpatrick, standing on the steps of a brick hotel (the Central). When he first saw me in my suit, all stained with the extract of tan bark, he laughed heartily and then said, “Hello Colonel, where have you been, and what is wrong with your uniform? It’s dyed another color other than grey. Have you put on some Indian war paint?”

“I don’t care much about the color of my uniform now, General, but the blamed liquid from the tan vat that got into my mouth, and down my throat, needs something stronger than water from the spring out yonder to settle my stomach. What have you, General, for me?”

“Come in,” said Kilpatrick, “drink from my own canteen;” and we walked up stairs to a room which he used for his headquarters.

Then a young man, in a velvet suit, with yellow curls in his flowing hair, which covered his head and shoulders, entered the room, and Kilpatrick said to him:

“General Custer, permit me to introduce to you Colonel Payne of the Black Horse Cavalry, who was wounded and captured this afternoon.”

I noticed these officers were very cordial, and attentive to me, and I took in the situation. They wanted to gain all the information they could of me in relation to the strength of the Confederate forces in the vicinity, for everyone [knew] more fighting was soon to follow. I prepared myself to tell the most exaggerated stories of our numbers.

“Drink from my canteen,” said Custer, and then Kilpatrick handed me a fragrant cigar, and we all took a smoke. This was after I was given something to eat. I was sitting in an old rocking chair and Custer and [Brig. Gen. Elon] Farnsworth to my right and Kilpatrick to my left.

“How many men has Stuart?” asked the Federal Commander.

“About 12,000, the whole of Lee’s Cavalry, and six batteries of artillery [in reality, Stuart only had three brigades totaling some 4,500 men and a battery of horse artillery]. It is the flower of the Confederate army. They are right on your heels, General. The only reason they were not all engaged in the fight today, was because it took more than half of our force to take care of the immense wagon train of the Potomac army that we captured yesterday;” and while I continued in this extravagant way, I noticed Kilpatrick and Custer look at each other with intense earnestness. The reason I made up my fanciful tale was to keep the Federal Commander from immediately attacking Stuart, whose men were all tired and worn out from the long marches. They needed rest. I think my story prevented Kilpatrick from following after Stuart that night [after Stuart withdrew his force brigade by brigade and headed to Jefferson and then on to Dover]. I cannot tell why Stuart went northeast to York, and then toward Carlisle. I heard once that he was misled by German guides [Stuart had forced Hanover farmer Jacob Leppo and several others to show him the way to Dover]. Kilpatrick, I understand, went to Gettysburg, where fighting began the next day.

“I was a prisoner of war, and was sent first to Fort Delaware, and afterwards to Johnson’s Island, in Lake Erie. I was held a prisoner for six months, and then paroled.”

The 33-year-old Payne was eventually exchanged and returned to the Confederate army. Promoted to brigadier general, he survived the war and returned home to Warrenton, Virginia, where he resumed his legal practice. He made his winter home in Washington, D.C., where he owned considerable real estate, and was in the Confederate records room with fellow Warrenton attorney John Singleton Mosby and other former officers when George Prowell interviewed them.

He told Prowell, “I shall be pleased to accept your invitation to visit Hanover, next August. I have never been there since the war. I would like to see if that tan vat which I fell into is still there.”