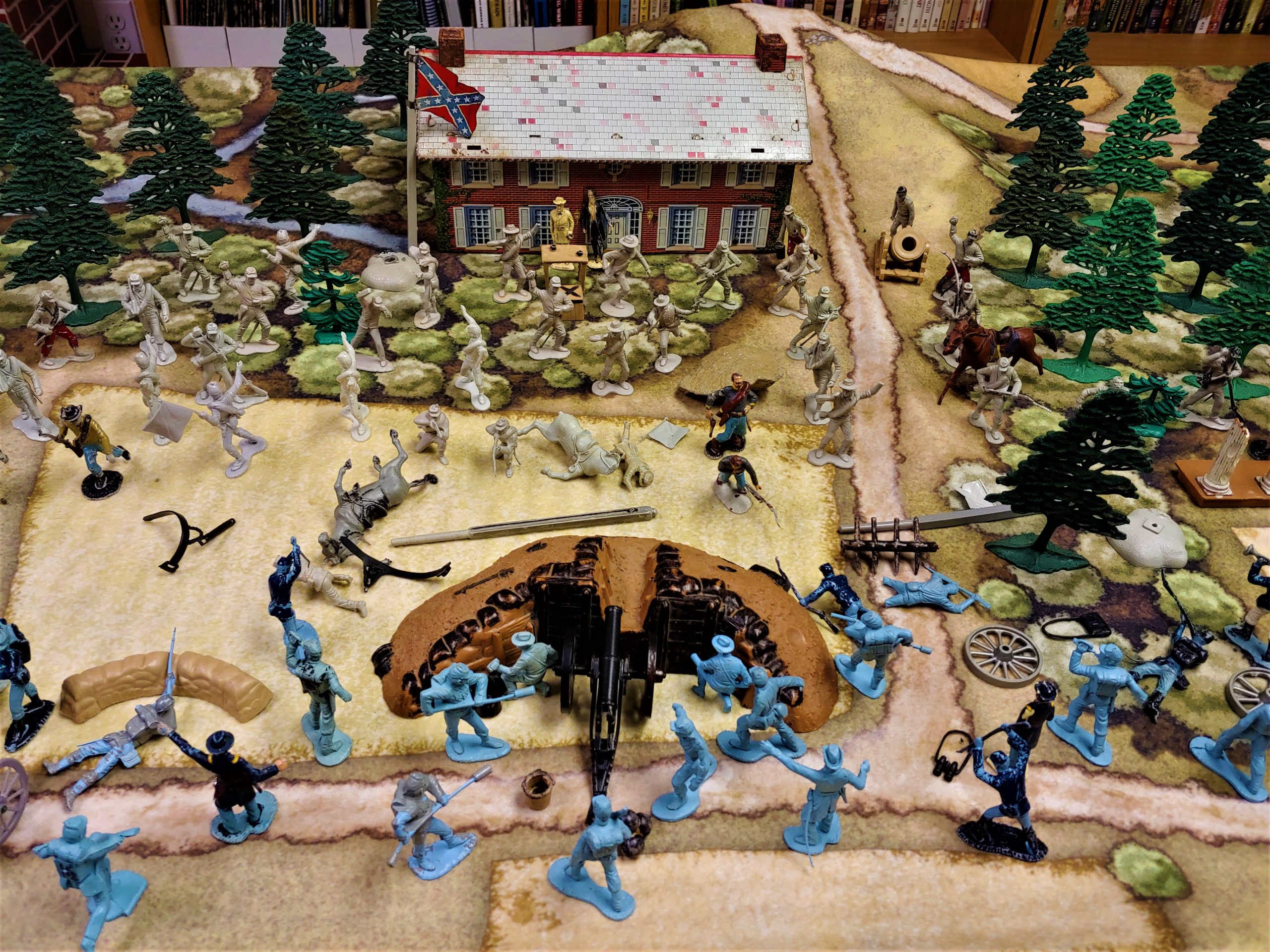 22 Civil War books that I have written to date. 1 Underground Railroad book. 6 miniature wargaming books. 6,193 Civil War books from my inventory sold and signed in person at my frequent lectures and PowerPoint talks in the past 10 years. Thousands of books sold by book retailers and amazon. 67,000 miles on my Buick in six years just to give talks in 17 different states from Maine to Texas. Some amazing friends. Two sons who are college history professors. A deep love for Civil War history that I am trying to pass down now to my six grandkids.

And it all started on Christmas morning 1962 in a village in southeastern Ohio.

Little did my parents know that a shopping trip to Montgomery Ward to look for gifts for my sister and me would change the rest of my life so profoundly. My dad, a WWII veteran who had landed on Omaha Beach on June 7, 1944 (the day after D-Day), was a man of many talents and a modest income working for the Ohio Department of Natural Resources, using his degree in forestry.

He and mom shelled out several dollars of their hard-earned cash for a huge box of toy soldiers to give to me.

And the rest, as they say, is history. 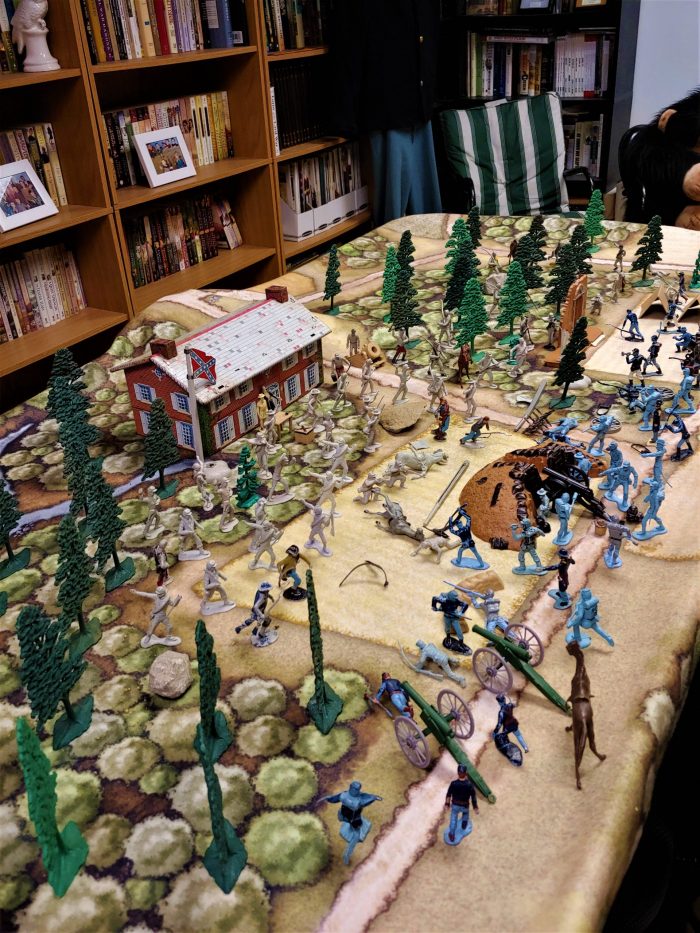 I was delighted that long-ago Christmas morning. I have zero memories of any of the other gifts my mom and dad gave me that year but I sure do remember the massive box, gaily wrapped under the tree. As I eagerly tore off the paper, I squealed in delight and sheer joy. A metal Southern mansion that my dad assembled for me. A black plastic cannon. Two mortars. Several tents. The ruins of another mansion. An artillery lunette. Scads of soft plastic soldiers molded in light blue or gray. Cream-colored Abraham Lincoln, U. S. Grant, Robert E. Lee, and Jefferson Davis. A falling horse and rider. Accessories. It was an imaginative little boy’s paradise.

Countless hours of fun with my friends followed. We set up all kinds of battles in my parents’ house. And, when the weather was favorable, we simulated battlefields in a sandbox in my dad’s little orchard of apple trees, using small apples or big marbles to knock down the soldiers and blast through the breastworks of sticks. We lived only ten miles from a massive equestrian statue of Phil Sheridan, who became my boyhood hero. I devoured everything I could find on Little Phil.

I began to read every Civil War book I could check out of our local library, learning a much as I could about the war, the leaders, the common soldiers, and the tactics. My parents bought me the American Heritage Civil War book with its colorful drawings of Civil War battles. Those sketches became my blueprints for bigger and grander battles, ones following the general battle lines of real fights.

I took a class in Civil War history when I was a student at Miami University. Not being a history major, I had to talk my way into taking a 300-level course designed for history majors but finished with an A. My research paper was on the Iron Brigade at Gettysburg, something that I had played constantly under those apple trees as a kid.

I graduated with an undergraduate degree in pulp and paper science and engineering and embarked on a 40-year career as a scientist, group leader, global technology platform leader, and then global director of new product development and finally the owner of my own successful consulting business. All the while, I kept reading Civil War history. The toy army men were now playthings for my kids as I moved into miniature wargaming (see the example of one of my games below) using model railroad scenic effects and 15mm pewter soldiers. 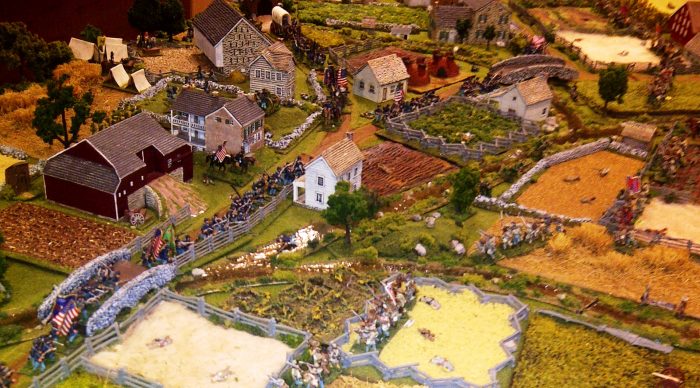 Our two sons played wargames with me and our friends. They learned a love for history and both boys ended up with advanced degrees in history. My daughter followed me into the pulp and paper industry as she started her business career. The army men sat in a box until our grandkids came along. The oldest of them has now co-written his first Civil War book with me; I plan to write a book with each of my grandkids when they are old enough. 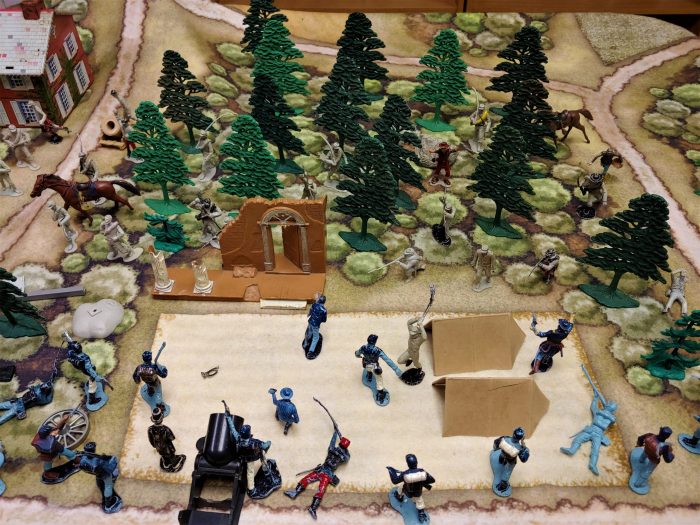 But it all started here, with these toy soldiers on that frosty December morning far away from my current home. I lost several of the soldiers, Virginia worm fences, and accessories over the years. Some I painted (now chipped and fading). The big tent broke and was thrown out. So was the white hard plastic portico that once fit the metal mansion. But the bulk of the 54mm Marx Blue & Gray set survived, augmented with other army men and trees that I picked up as a kid from friends, at times trading duplicate baseball cards or cowboys and Indians for more Civil War stuff. 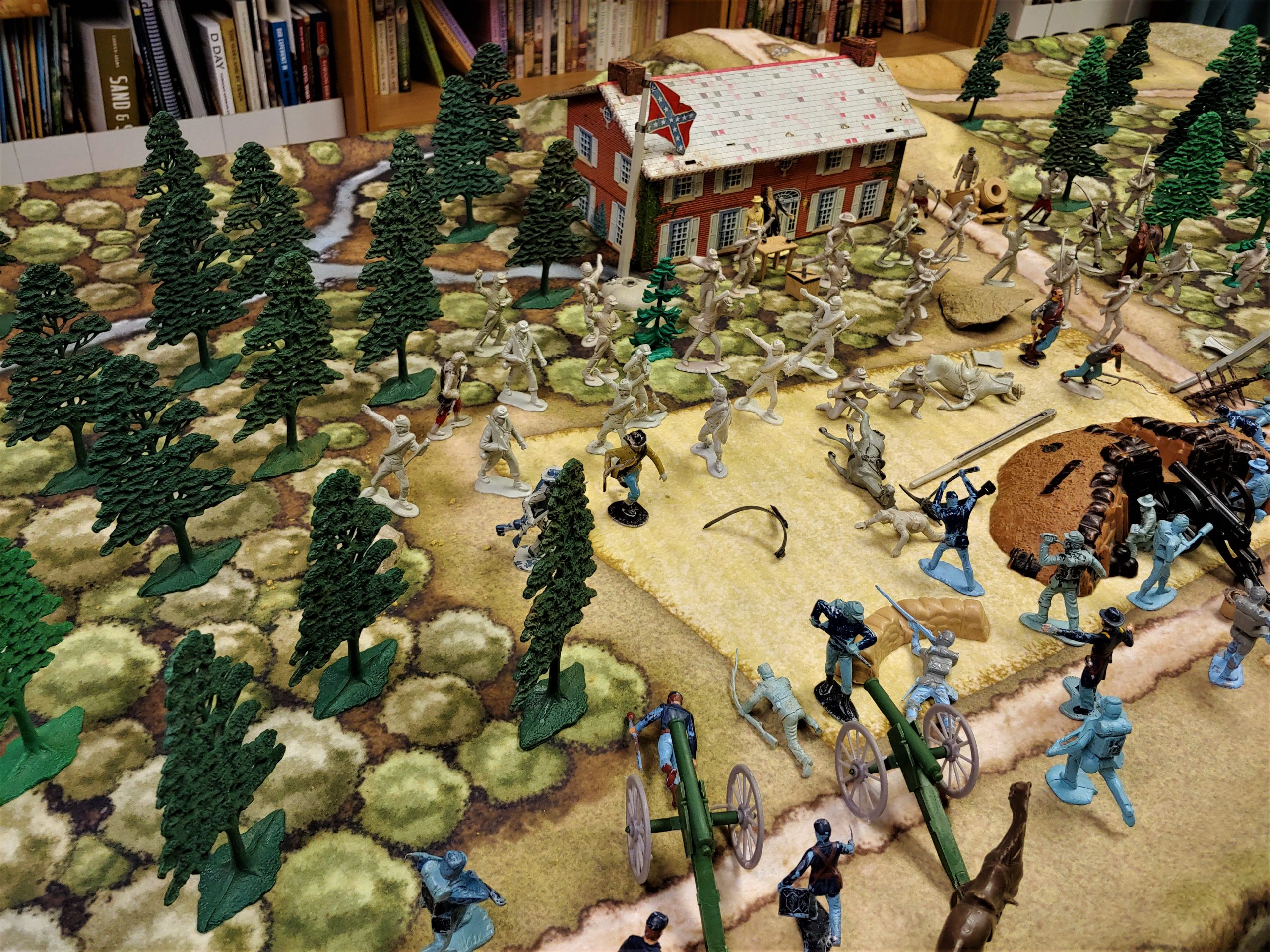 And that love for history will continue through the next several generations, Lord willing.

To quote Ted Savas, one of my good friends and the publisher of five of my books to date:

3 comments on “The Start of it All”