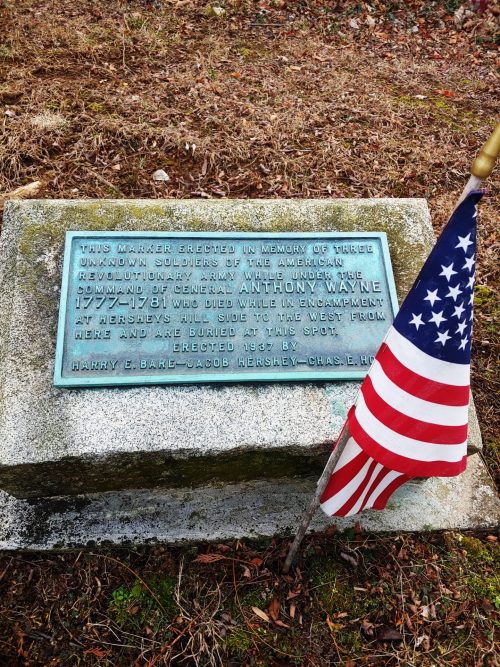 In March 1781, famed General “Mad Anthony” Wayne came to York, PA, to take command of the Pennsylvania Line infantry and recruit new soldiers for the Continental Army. His force soon grew to almost 1,000 men, and he drilled them constantly at their encampment on Penn Common (now Penn Park). 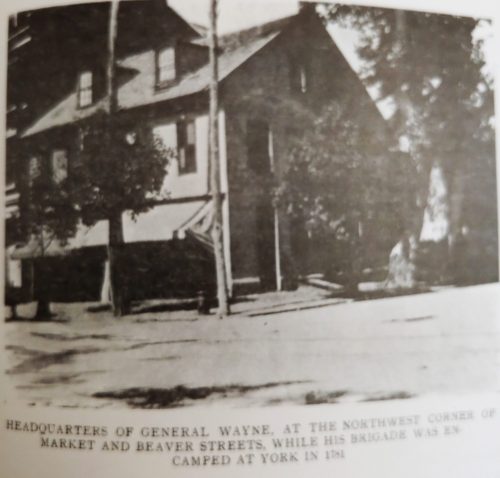 The general made his headquarters in a house at the northwest corner of what is now Market and Beaver streets.

At 9 a.m. on May 26, despite smaller enlistment than expected and lacking sufficient equipment, Wayne set out for Fredericksburg, Virginia, to reinforce forces gathered there under the Marquis de Lafayette.

That evening, they camped for the night on the slope of Hershey’s Hill near what is today Menges Mills, PA (at the time, Hershey’s Mill, or, as one soldiers wrote in his diary, “Harsh’s Mill”).

Three soldiers were buried nearby. A marker is now in the graveyard of Garber’s Mennonite Church.

At daylight on the 27th, Wayne’s soldiers broke camp and marched through Hanover to Littlestown and then over time down to Frederick. They crossed the Potomac River at Noland’s Ferry (now Tuscarora, Maryland). The troops arrived at Fredericksburg on June 7, joined Lafayette’s force, and later helped George Washington defeat the British at Yorktown.