The only Confederate casualty in the skirmish of Wrightsville 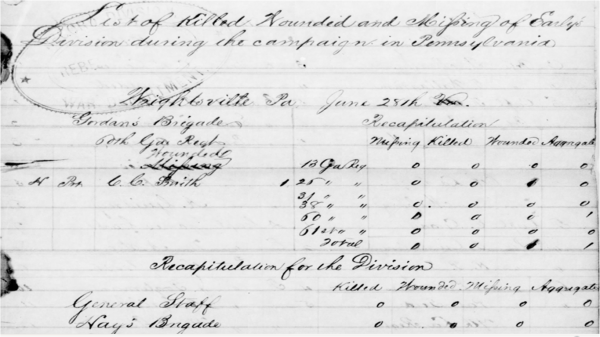 This original handwritten casualty report was written shortly after the battle of Gettysburg and recaps the killed, wounded, and missing from Jubal Early’s division. This section is for the June 28, 1863, skirmish at Wrightsville, Pennsylvania, where Brig. Gen. John B. Gordon’s brigade of six regiments from Georgia attacked more than 1,500 Union militiamen, black civilians, and wounded veterans of the Army of the Potomac, plus a handful of men of the 87th Pennsylvania who had escaped from the debacle at Second Winchester.

John Gordon’s adjutant reported only one casualty in the fray — Private Charles C. Smith of Company F of the 26th Georgia.

Not much is known about Smith. He enlisted in Company N on September 29, 1861. On March 31 that company mustered out of the service. Less than a week later, Smith enlisted as a private in Company F on April 4, 1862. It is not certain exactly where on the Wrightsville battlefield he was wounded, but the 26th is known to have marched on the right flank of Gordon’s advance. They moved eastward along Kreutz Creek and then veered to the north, crossed the creek, and in a battle line walked up the slope toward today’s Sunset Drive area. They encountered severe fire from the York Invalids, a battalion of convalescing patients from the U. S. Army General Hospital in York.

Smith was carried to the rear and stabilized by the regimental surgeon. He survived and returned to the ranks. On July 10, 1864, he was again facing York County soldiers on the battlefield of Monocacy. Smith was captured and sent to the Point Lookout prison camp in eastern Maryland. On October 30, he was paroled and sent via boat to Venus Point on the Savannah River in his native Georgia. He waited there until he was formally exchanged on November 15. His service records end there. There is no account whether he surrendered with the remnants of the 26th Georgia at Appomattox Courthouse in April 1865 when Robert E. Lee capitulated.