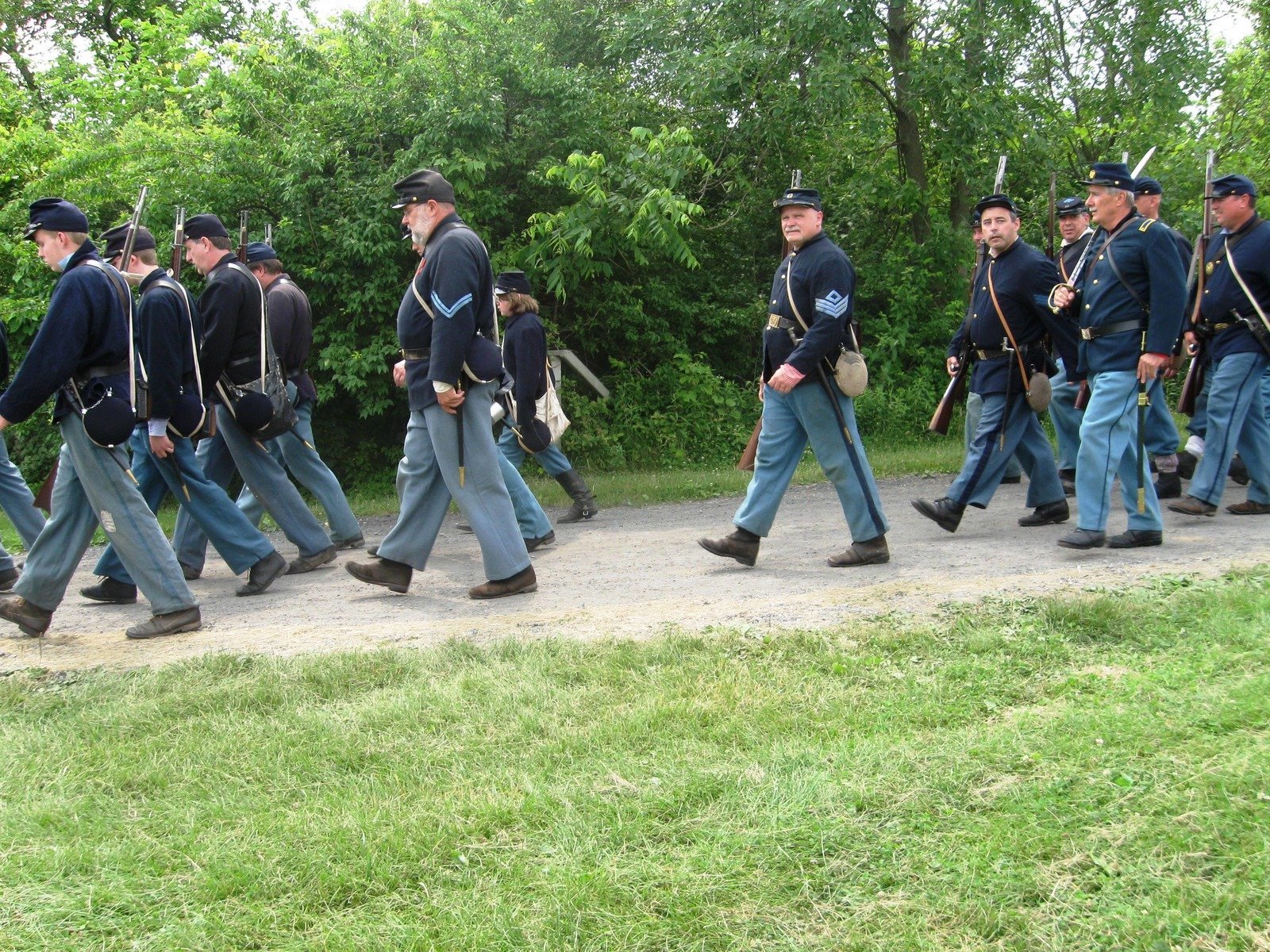 Union Civil War reenactors on the march in this photo from June 2010
Posted by Scott MingusAugust 31, 2007October 10, 2020 Gettysburg Campaign

The human cost of war

The 27th Pennsylvania Volunteer Militia was hastily raised in the mountainous region northwest of Harrisburg to serve for “the duration of the present emergency” during Lee’s invasion of Pennsylvania in June 1863. The regiment was filled with starry-eyed volunteers who eagerly wanted to defend the commonwealth from the oncoming Rebels. Some were former soldiers whose original terms of enlistment had expired, but most had no previous military experience.

Comprised heavily of coal miners, teenaged boys, store clerks, and small independent farmers, the regiment was organized and mustered into service in Harrisburg at Camp Curtin. The men were loaded into railroad cars and taken to Columbia, along the Susquehanna River in Lancaster County. They pitched tents and set up a campsite in a meadow overlooking the river, and began constructing defenses west of Wrightsville to guard the long covered bridge. On June 28, they fought a small skirmish with elements of John B. Gordon’s Confederate brigade, suffering less than a dozen casualties, with no fatalities.

The cost of war can be measured in property damage, political fallout, financial spending, but, most of all, in the human toll on both the victims and their families. Here is just one story from among the men who defended the imposing bridge between York County and Lancaster County.

Following the Battle of Gettysburg, the 27th Militia was among the troops sent to pursue the retreating Confederate Army of Northern Virginia. They marched in support of the Federal Army of the Potomac but were not expected to remain on permanent duty with that army. After the Rebels retired into Virginia, the 27th and other militia regiments marched north to Chambersburg as a reserve. Many of the soldiers were unaccustomed to days of hard marching, prolonged alternating exposure to driving rains and blistering heat, and disease from unfamiliar water and food. Many of the coal miners were hard hit by illness, exhaustion, and sunstroke. For one family in the Pennsylvania mountains, the news would not be good.

From the Pottsville Miner, a newspaper serving part of the mountainous region…
“When the 27th Regiment, P. V. M., left Chambersburg for Harrisburg, Samuel Evans of Middle Creek, this County, a member of Company I, Capt. Etien, was left in the Academy Hospital suffering from inflammation of the lungs and bowels. We are pained to state that he died on the 4th inst. He leaves a large family dependent upon him. He was a miner. On Thursday, his remains were interred at St. Clair, the Company of that place which was in Col. Nagle’s Regiment, attending the funeral in a body. An effect will be made to procure a pension for the family of the deceased.”

The Gettysburg Campaign had claimed another victim, one that is not counted in the “official” death tolls. Rest in peace, Sam Evans.