The Guerrilla Hunters: Irregular Conflicts During the Civil War 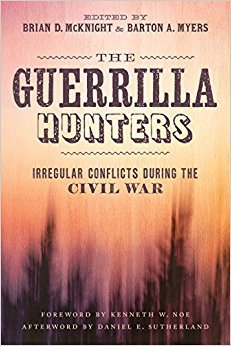 When one thinks of the term “guerilla warfare” in the context of the Civil War, often the mind goes immediately to William Quantrill or “Bloody Bill” Anderson, and their exploits/depredations (depending upon your personal viewpoint) in the Missouri/Kansas area. Romanticized or criticized in many movies (particularly because of the involvement of the James brothers and the repeated savagery at Lawrence, Kansas), the partisan irregular fighting in the Trans-Mississippi Theater was both brutal and bloody, often crossing the line between military necessity and wanton lawlessness.

That, of course, is the popular image, reinforced by Ang Lee’s 1999 uneven  Ride With the Devil and a host of fictional, but often very popular Westerns featuring gangs of former or current Civil War soldiers who ride west looking for trouble (or in some cases, trying to avoid it).

The reality of irregular warfare in the Civil War is far more complex, and far less cinematic, in scope.

Brian D. McKnight and Barton A. Myers have teamed up to edit an fascinating collection of scholarly articles on partisan warfare in the War Between the States. In their newly released The Guerrilla Hunters: Irregular Conflicts During the Civil War, they present a diverse array of sixteen thought-provoking essays from all major theaters of operation, not just the Trans-Mississippi. These are well worth reading if you have an interest in the often shadowy, highly personal irregular conflicts that at times pitted family members and neighbors against one another.

McKnight and Myers, both well respected history professors, also provide a useful “A Reader’s Bibliography of Civil War Guerrilla Studies” for those who wish a deeper dive into specific topics. Kenneth Noe wrote the foreword and Daniel Sutherland the afterword.

This fine new book presents a balanced, authoritative look at the partisan warfare, both authorized and unauthorized, and how it shaped the policies and actions of the Federal government and Richmond. These “little wars” were not mere sidelights; in many cases, they helped dictate what the main armies were doing and the overall strategy and tactics.

For example, the partisan sniping in what became West Virginia and eastern Tennessee often diverted large numbers of cavalry (and even infantry and artillery in many cases) from other operations, or became the cause of targeted operations with regular troops. Several of these essays explore this cause-and-effect relationship, as well as the political and geo-social aspects of the guerrilla warfare.